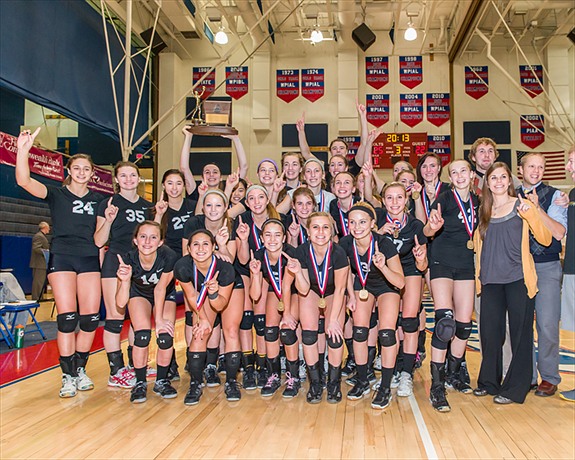 North Allegheny won its first WPIAL championship since 2008 as the Lady Tigers topped the Bethel Park Black Hawks on Saturday night with a 3-0 victory in the Class AAA Girls’ Volleyball Finals.  They Lady Tigers and Black Hawks battled nip and tuck throughout the night, but NA garnered the victory behind set scores of 25-21, 25-21 and 25-22.

In the first two sets, NA and Bethel Park matched each other point-for-point before the Lady Tigers took hold in the later stages.  Thanks in large part to the play of Notre Dame recruit Meg Morningstar, North Allegheny was able to prevail in both sets for a 2-0 match lead.  Morningstar finished with an unofficial eight kills and four blocks. For her efforts, Morningstar was named the Wright Automotive Player of the Game.

In set three, NA opened up a 19-12 lead before the Black Hawks rallied back behind the blocks and kills of Samantha Simpson.  The senior collected two kills and a pair of blocks to trim the deficit to 21-20. Also having a big night for Bethel Park was Stacey Kazalas with an unofficial 13 kills. As they did in the first two sets, the Lady Tigers took control late thanks to a block by Daniele Wall and a kill by Ashley Leto for a 24-22 lead.  Erin Swartz and Jamie Robatisin were also key cogs in the NA victory with timely kills and blocks. A service error by Bethel Park closed out the set and the match as the top-ranked Lady Tigers left Chartiers Valley High School as champions.

North Allegheny improves to 19-0 overall and will face the District 6 champion State College Little Lions on Tuesday night in the opening round of the PIAA playoffs.