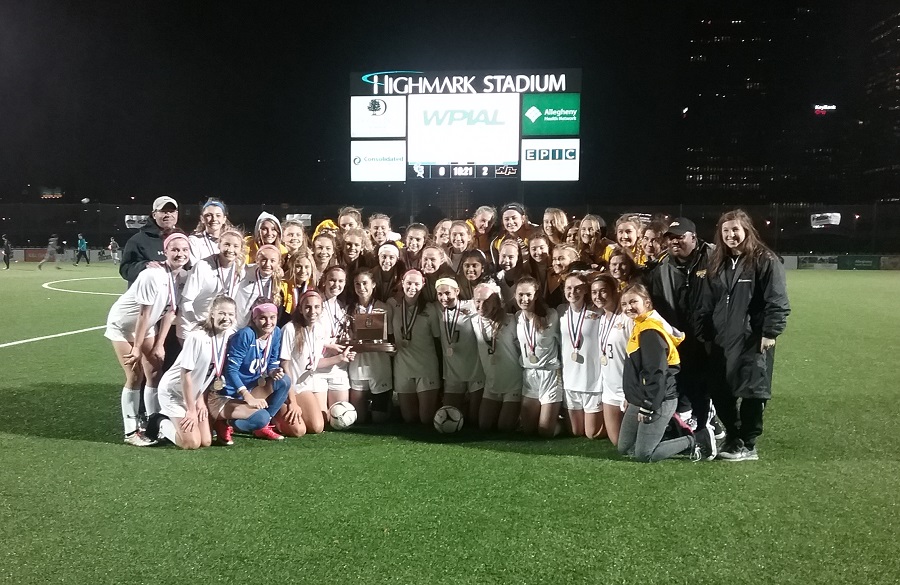 The North Allegheny girls’ soccer team won the first WPIAL title in program history on Thursday night with a 2-0 win over the Norwin Knights at Highmark Stadium. The victory continues a banner season for the Tigers which also saw them capture their first undefeated section crown along the way. North Allegheny will set its sights next on a state title beginning with the PIAA first round on Tuesday night.

Norwin, a perennial title contender, was appearing in the WPIAL championship game for the fourth time in the last five seasons. With a stiff wind at their backs, the experienced Knights were hoping to take advantage of their team speed with long passes ahead to University of Pittsburgh recruit, Katelyn Kaufmann. Norwin managed only a few highly-contested shots in the first half thanks to the play of the NA back line.

After a scoreless first half, the North Allegheny offense had its turn with the wind in the second half and displayed some of its own team speed. Providing persistent pressure in the opening minutes of the half, the Tigers broke through for an odd-man break and the game’s first goal. On a three-on-one, Ava Ruppersberger delivered a pass to Emma Bundy in the box, who deftly passed to her right where a wide-open Sarah Schupanksy buried a shot into the Norwin net for a 1-0 lead with 33:26 remaining in the second half. The goal was the 22nd of the season for the University of Pittsburgh recruit.

The Knights turned up the intensity level following the NA goal and kept the Tigers on the defensive. However, the efforts of Isabella Pietropola, Tulasi Syamala, Halle Marsalis, Riley Miara, Alexa Spano, Natalie Mudd and Sophia Spano thwarted every Norwin charge into Tigers territory. For their efforts, the entire North Allegheny defense and midfield was named the Wright Automotive Players of the Game.

As the Tigers continued to stave off the Knights, North Allegheny was able to provide some breathing room when Bundy, a Duquesne commit, played the ball into the attacking zone and sent a pass to her left where she found a streaking Hannah Kirkpatrick in front of the Norwin net. The University of Tampa commit pushed the ball passed the Norwin keeper for her fourth goal of the season and a 2-0 North Allegheny lead with 2:30 remaining.

After the Kirkpatrick goal, the waning minutes ticked off the clock and the Tigers gathered at midfield to celebrate the 2019 Class AAAA WPIAL championship. The shutout was the eighth of the season for NA goalie Madison Vukas.