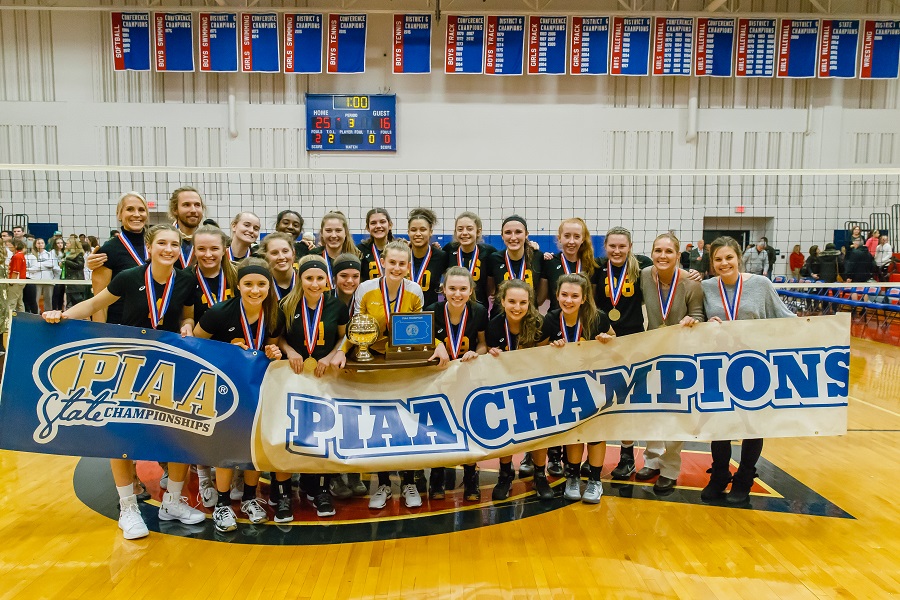 Under the bright lights of the PIAA Class AAAA championship, the North Allegheny Tigers produced their most shining display of the season with a 3-0 sweep of the Bishop Shanahan Eagles on Saturday from Richland High School in Johnstown. The Tigers captured their fourth PIAA crown and first state title since 1994. NA won by set scores of 25-21, 25-12 and 25-16.

In the opening set, the Tigers exchanged point for point with the District 1 champions and were tied 16-16 until senior Kayla Dinkins rattled off three straight points with a kill and back-to-back blocks for a 19-16 advantage.  From that point on, the Tigers bombarded Bishop Shanahan with a baffling display of offense and defense. Junior Avery Tuman added three kills in the opening set to help capture a 25-21 win.

North Allegheny and Bishop Shanahan drew even at 9-9 in set two before the Tigers went on a 10-1 run to take control of the set and the match. Dinkins delivered three kills and three blocks, while junior Anna Sprys came through with four kills.

With a state title within their grasp, the Tigers dominated the third set. Freshman Paige Miller picked up a kill and an ace for the final two points of the night to secure a 25-16 win and 3-0 sweep. The PIAA championship victory was a convincing and thorough victory for the Tigers. For their efforts, the entire North Allegheny girls’ volleyball team was named the Wright Automotive Players of the Game.

The victory by North Allegheny capped a big night for the WPIAL as three District 7 teams secured PIAA championships on the day, including Freeport and Knoch.

North Allegheny concludes the 2017 season with a perfect 24-0 record and championship trophies in the WPIAL and PIAA. Bishop Shanahan suffered its only defeat of the season to North Allegheny and ends the year with a 25-1 mark. Congratulations to the North Allegheny girls’ volleyball team and coaching staff on a terrific season.