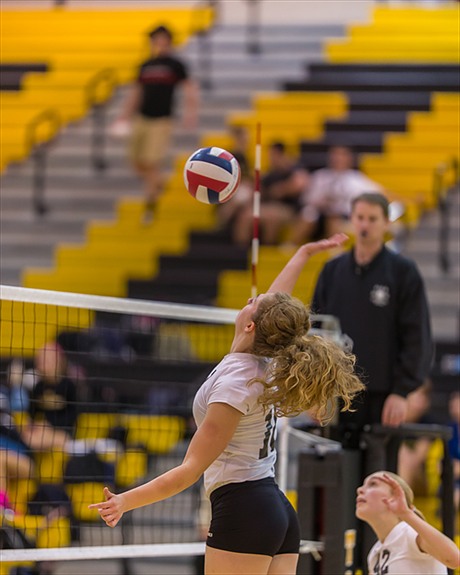 The North Allegheny Girls Volleyball Team came a step closer toward a section championship on Thursday night with a 3-0 sweep of the rival Seneca Valley Raiders. Senior Erin Swartz paced the Lady Tigers throughout the night with big swings and timely blocks, garnering her Wright Automotive Player of the Game honors. Swartz finished with a team high 10 kills and four blocks.

Seneca Valley received a big boost before the match as senior middle hitter Abbie Trzeciak returned to the lineup after missing time with a knee injury she sustained in June.  However, Trzeciak’s presence was not enough as North Allegheny jumped on the Raiders immediately for a 20-9 lead, on their way to a 25-13 opening set win. Senior Libero Jessica Samuels was outstanding in the first set, covering the floor for 10 digs.

The Raiders kept things a little tighter in the second set, owning a 14-13 lead midway through.  Senior Ashley Leto helped lead the charge from that point on as the Tigers rolled off 12 of the next 18 points for a 25-19 win for the Lady Tigers.  Leto posted four kills in the set and finished with eight on the night.  Senior Jamie Robatisin added three kills in the set as well, ending with six for the match.

In the third and final set, the Lady Tigers found themselves deadlocked with Seneca Valley 9-9 before NA went on a 12-1 run to take full command.  Swartz was a key contributor in that streak of points, providing four kills and block. North Allegheny cruised to a 25-16 win and a 3-0 match victory over the always tough Raiders.

North Allegheny, who has already clinched a playoff spot, ups its record to 14-0 overall and 10-0 in Section 3-AAA. Seneca Valley maintains their playoff hopes despite the loss, owning a 10-4 record and 6-4 section mark. The Lady Tigers can clinch an outright section crown with a win at Pine-Richland on Tuesday night. Start time is slated for 7:00 pm.