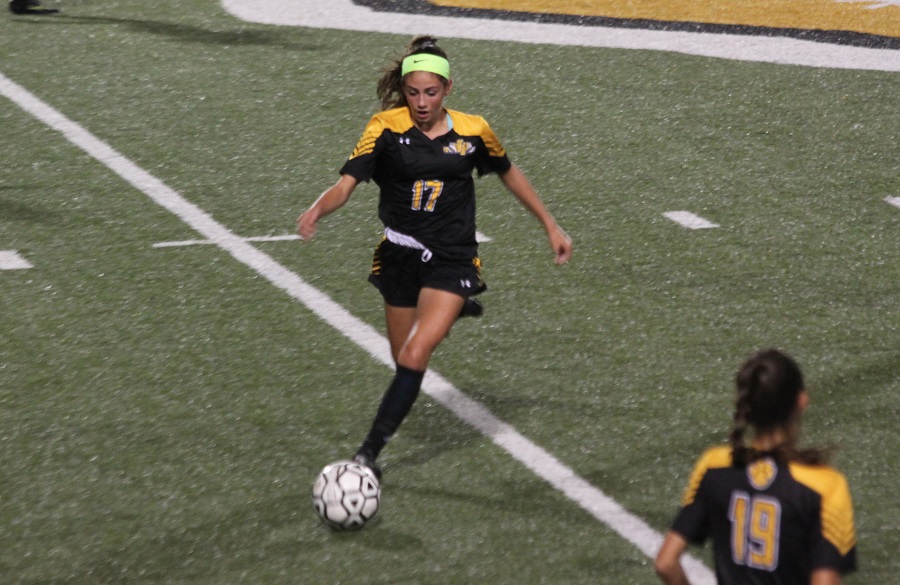 After scoring three goals in their last three games, the North Allegheny Lady Tigers exploded for five goals in a 5-1 section win over the North Hills Indians on Monday night.

It only took the Tigers 2:17 to find the back of the net when sophomore Sarah Schupansky found junior Ava Ruppersberger for a 1-0 lead.  Two minutes later, junior Hannah Kirkpatrick fed Schupansky for a goal to make it 2-0, Tigers.  Kirkpatrick made it 3-0 with a rocket shot past the Indians’ goaltender off a feed from Ruppersberger.  Senior Alex Adams got on the score sheet when she assisted Schupansky on her second goal of the game with 30 seconds remaining in the half for a 4-0 advantage.

It was a rainy night at Newman Stadium and it continued to pour down in the second half as the teams took to the field.  North Allegheny’s midfield led by Adams and juniors Bella Pietropola and Sophia Spano, controlled the play and dominated the possession game.  North Hills was able to get a few more shots on the net but the stifling defense of NA slowed any momentum they were able to muster.  Seniors Caroline Noel and Jetta Kroll anchored the defense, while juniors Natalie Mudd and Riley Miara contributed to the offensive output.  At the 12:49 mark, Kirkpatrick assisted on Ruppersberger’s second goal of the game for a 5-0 lead.  North Hills broke the shutout with a goal late in the game but NA emerged victorious, 5-1.  Making her first varsity appearance was sophomore goaltender Julianna Werner as she came on in the second half in relief of starting goaltender Madison Vukas.

The win moves the Lady Tigers to 6-2 on the season and 5-1 In Section 1-AAAA.  The Tigers welcome an old foe to the friendly confines of Newman Stadium when they battle the Rams of Pine-Richland Wednesday night. The game will be broadcast live via the internet on the North Allegheny Sports Network. Kickoff is slated for 7:30 p.m.