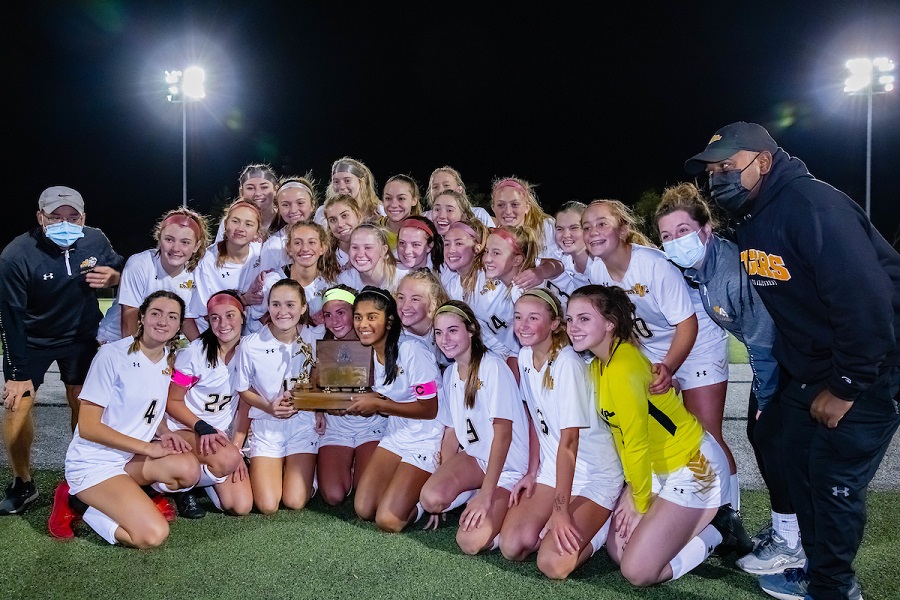 In a game that featured three penalty kicks and numerous twists and turns along the way, the North Allegheny girls’ soccer team captured a second straight WPIAL Class 4A championship with a 2-1 win in double overtime over the Butler Golden Tornado on Thursday night. Sophomore Lucia Wells scored the golden goal for the Tigers with 5:50 left in the second overtime at Antimarino Stadium in Monroeville. It was only the second time this season the Tigers have gone to overtime and on both occasions it was Wells who delivered the game winning marker.

Facing a Butler team that was making its first WPIAL title game appearance since 2002, the fifth-seeded Tigers continued their playoff trend of starting quickly. Just 11 minutes into the game, senior midfielder Bri Torchia sent a long through ball to senior Sarah Schupansky who eluded goalie Paige Miller and drilled a shot into the Butler net for an early 1-0 lead.

Following the Schupansky goal, her 21st of the season, North Allegheny utilized a patient possession game with defensemen Olivia Mark, Sophia Spano, Kena Shannon and Tulasi Syamala. Butler refrained from approaching the NA possession game aggressively and the first half ended quietly with the Tigers leading, 1-0.

In the second half, Butler stretched out its offensive approach and produced a penalty kick when Gabrielle Boden was tripped up in the goal box with 18:05 on the clock. Youngstown State commit Chloe Weiland took the penalty kick but was denied on a diving save by NA goalie Juliana Werner, keeping the Tigers one-goal lead intact.

Still trailing by one with less than a minute to go, Butler was granted yet another penalty kick when Samantha Miller was contacted in the box with 32 seconds to play. Samantha Miller converted on the PK to tie the game at 1-1 and force overtime. After three consecutive shutouts, the goal was the first allowed by the Tigers in over 319 minutes of playoff soccer.

Undaunted, North Allegheny went back on the attack in overtime and drew its own penalty kick with 9:15 on the clock in the extra session. Schupansky took the PK but was turned away on a sprawling save by Paige Miller and the game continued on.

The Tigers had the better of the field position in extra time, but the Golden Tornado managed a great scoring chance with nine minutes remaining in the second overtime but Samantha Miller’s shot from 20-yards out was stopped on another diving stop by Werner. 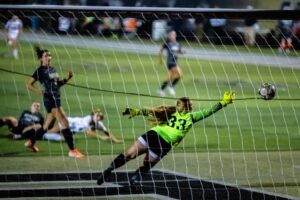 Lucia Wells scores the golden goal to lift NA to a 2-1 win in the WPIAL championship.

Then with 5:50 remaining in the second overtime, junior Halle Marsalis played a ball from the midfield to Schupansky, who quickly toed a pass to Wells. The NA sophomore streaked past the Butler defense and into the goal box for a left-footed shot that beat Paige Miller to propel the Tigers to a thrilling 2-1 victory. The goal was Wells’ 17th of the season.

For their respective efforts on offense and in net, Wells and Werner were selected as the Wright Automotive Players of the Game.

With the win, North Allegheny improves to 11-2 on the season and advances to the PIAA playoffs for the second straight year. The Tigers will take on either Altoona or McDowell on Saturday, November 14 in the PIAA quarterfinals. Butler’s season comes to an end with a 11-2 record.