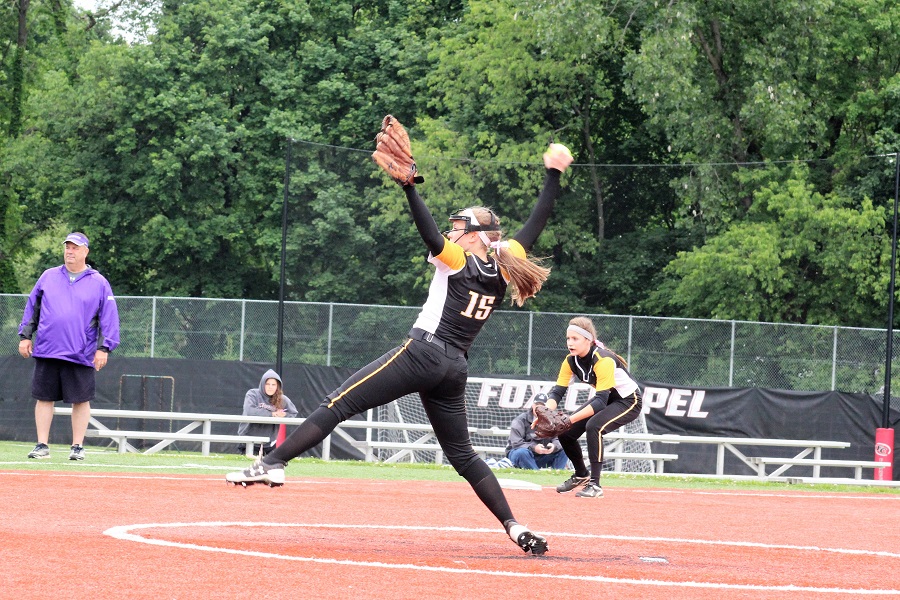 The North Allegheny Tigers clinched a berth in the Class 6A PIAA playoffs with a 6-3 victory over the Baldwin Highlanders on Friday afternoon at Fox Chapel High School. It will be the second trip in the last three seasons for the Tigers to the state playoffs.

Having predominately used late-inning heroics for their playoff victories in 2017, in this WPIAL 3rd place consolation contest the Tigers jumped out in front early and took a 2-0 lead in the top of the first on a two-run double by Regan Brodine. Baldwin got one run back in the bottom of the first on a sacrifice fly by George Mason recruit Taylor Dadig to trim the score to 2-1, Tigers.

North Allegheny added on to the lead in the top of the third with a four-run frame to grab a 6-1 advantage. Ashley Adams drove in one run with an RBI groundout and Brodine plated another with a fielder’s choice RBI that scored Brooke Serbin who alertly slid under the tag attempt of Baldwin catcher Carly Santillo on a play at the plate. Not done yet in the inning, Dana Manz singled to right field to drive in NA’s fifth run of the game and Brodine trotted home on an attempted double steal for a 6-1 lead.

Looking to chip away, Baldwin cut the NA lead to 6-3 in the bottom of the fourth courtesy of an RBI double by Samantha Wampler and an RBI single by Katie Knezovich. However, that was a close as Baldwin would come thanks to a solid performance in the pitcher’s circle by Ashley Adams. After the two-run fourth inning for Baldwin, the sophomore hurler permitted only two more hits the rest of the way to earn the victory. Of the three runs allowed by Adams, only two were earned. Adding a 1 for 3 performance at the plate with an RBI, to go along with being the winning pitcher, Adams was named the Wright Automotive Player of the Game by the North Allegheny Sports Network.

Baldwin pitcher Addie Tagg finished strong as well, retiring the last 10 batters she faced consecutively. By then, however, the damage was done as North Allegheny’s strong start was enough to carry the Tigers into the PIAA playoffs. University of Pittsburgh recruit Rachel Martindale had a fine day by going 3 for 4 with two runs scored and Brodine finished with three RBI’s to pace the NA lineup.

North Allegheny improves to 14-8 on the season, while Baldwin’s year ends at 13-5. The Tigers will next play on Monday, June 5 against the champion from either District 6 or District 10 in the opening round of the state playoffs.