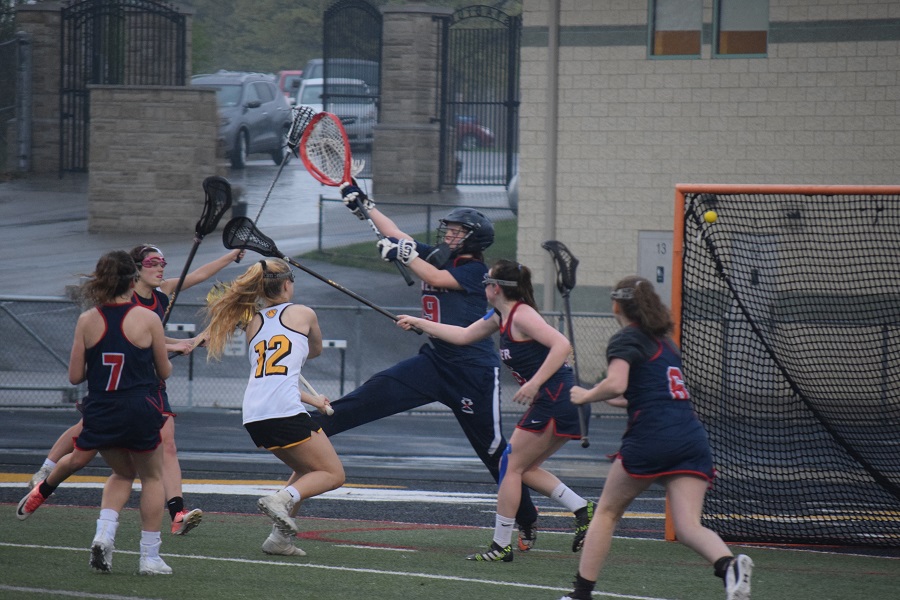 The North Allegheny girls’ lacrosse team earned consecutive victories for the first time this season with a 10-7 triumph over the visiting Shaler Titans on Thursday night. The Tigers broke a 6-6 tie at the half with four straight goals and dictated the pace in the second half to claim the Section 2-AAA victory. The win also keeps the Tigers in the hunt for a WPIAL playoff spot with three section games remaining.

Shaler grabbed the early lead at Newman Stadium on back-to-back goals from Rylee Wilson and Jasey Reiser for a 2-0 advantage. The Tigers netted their first goal of the night on a marker from sophomore Skye DePrado but Shaler answered right back on a goal from Alyssa Juzwick for a 3-1 lead with 17:45 left in the first half. NA sophomore Katie Oates cut the score to 3-2 but again the Titans regained a two-goal advantage on Wilson’s second goal of the night with 13:07 on the first half clock.

Using crisp passing, the Tigers knifed through the Titans for four consecutive goals to grab a 6-4 advantage with 7:56 to go before halftime. DePrado posted a natural hat trick and senior Paige Jones added another during the NA spurt. However, Mackenzie Romac and Reiser scored two in the last two minutes of the half to even the score at 6-6.

The second half belonged to North Allegheny as the Tigers dictated the pace and dominated possession. Senior Ryley McClellan broke the deadlock with a goal at the 4:38 mark of the half for a 7-6 lead. DePrado netted her fifth goal of the night, followed by goals from Jones and Lola Wilhite for a 10-6 advantage with 13:38 remaining in the contest. Shaler closed out the scoring with a goal from Ashlynn Wightman with 9:05 left to bring the score to its eventual final, 10-7, Tigers.

With her five goals on the night, DePrado was named the Wright Automotive Player of the Game by the North Allegheny Sports Network.

North Allegheny improves to 7-5 overall and 5-3 in Section 2-AAA. Shaler slips to 3-9 overall and 1-6 in the section. The Tigers will take on Sewickley Academy on Monday at 4:30 p.m in another section clash.