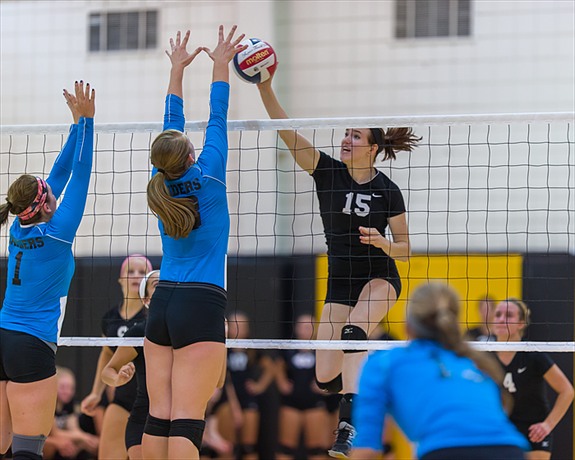 The Lady Tigers volleyball squad struggled to find a rhythm against a furious Seneca Valley Raiders attack in their second match of the season.  The Tigers opened the season with two Section contests this week and are now 1-1 after falling to the Raiders Thursday night in three straight games.

In the first game, neither team led by more than two at any point.  Then the Lady Raiders went on a 12-point run and closed the game by a score of 25-11.  From that point on Seneca Valley did not look back and won the next two games by scores of 25-17 and 25-11.  The Lady Raider charge was led by seniors Sydney Martini, Bre Damiani and junior Madeline Poirier who turned in impressive performances offensively.

Doing their best to stay with the Raiders on this night, the Lady Tigers attack was led by seniors Meg Morningstar, Bree Blair and junior Annika Chang. For her consistent play offensively and defensively, Meg Morningstar was named the North Allegheny Wright Automotive Player of the Game.

The Lady Tigers will look to rebound Monday September 8th with a home match against Mt. Lebanon.  Match time is set for 7pm.