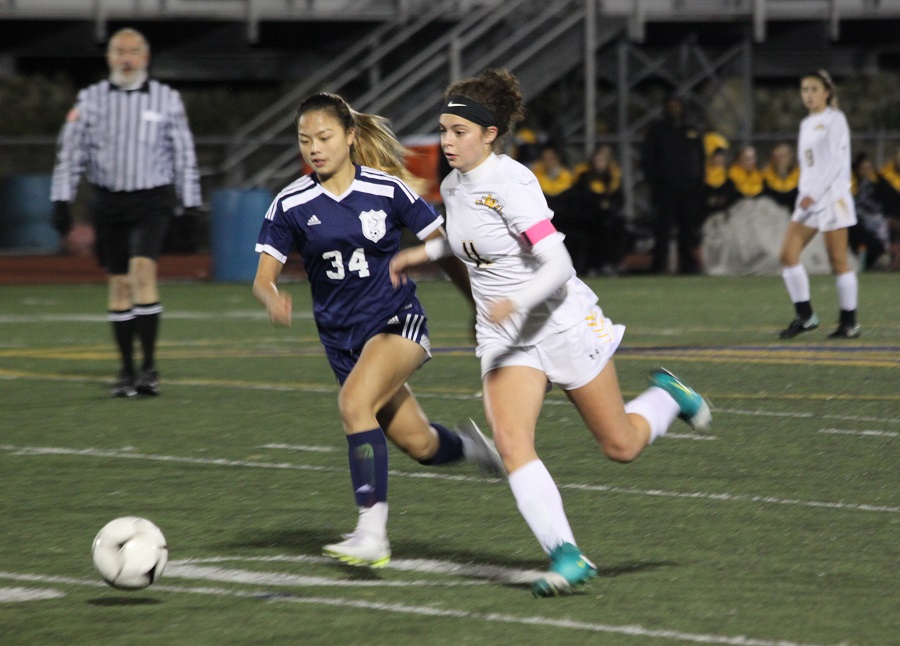 The North Allegheny girls’ soccer team fell to the reigning Class AAAA state champion Norwin Knights on Wednesday night in the WPIAL quarterfinals, 2-1.  Sophomore Lacey Bernick scored both of Norwin’s goals to help the Knights advance to the WPIAL semifinals on Saturday to face the Peters Township Indians.

North Allegheny outshot Norwin, 12-7, and had several good scoring chances in the first half. However, it was the Knights who scored the game’s first goal on an errant pass in the NA defensive zone. Bernick capitalized on the wayward pass, raced into the goal box and tickled the back of the Tigers net with a shot for a 1-0 lead with 9:02 to play in the half.

The persistent Tigers continued to pressure despite the early deficit and nearly tied the game just before halftime. Following a throw-in for the Tigers 30 yard out with 18 seconds left, NA built one final rush prior to intermission. Senior Alex Adams put a shot on net that was saved by Norwin goalie Liz Waszkiewicz and deflected in front of the net. Sophomore Sarah Schupansky pounced on the rebound and seemingly scored the game-tying goal. Unfortunately for the Tigers, the waning seconds of the half ticked off the clock just before Schupansky put the ball in the net. Saved by the bell, Norwin maintained a 1-0 lead going into halftime.

In the second half, North Allegheny tallied numerous shots on net, including scoring chances for Ava Ruppersberger and Hannah Kirkpatrick but timely saves from Waszkiewicz kept the Tigers off the board. Norwin added onto its lead with 15:40 to play in regulation on a corner kick that was deflected into the NA net on a right-footed kick by Bernick for a 2-0 advantage.

Undaunted, the Tigers answered back with 10:03 remaining in the game. Junior Emma Bundy boomed a free kick from 35 yards out that was perfectly placed beyond the outstretched reach of Waszkiewicz and under the crossbar to cut the Norwin lead to 2-1. The goal was Bundy’s ninth of the year, tying her for the team lead with Adams on the season. A sparkplug for the Tigers from the very start of the game, Bundy was named the Wright Automotive Player of the Game by the North Allegheny Sports Network.

Following the Bundy goal, the Tigers continued their furious rally but could not find the equalizer as Norwin staved off NA over the final 10 minutes for a 2-1 victory.

With the win, Norwin improves to 15-2 on the season. North Allegheny’s season ends with an 11-6-1 record. Congratulations to coach Chuck Kelley and the Lady Tigers for another exciting season of North Allegheny girls’ soccer.