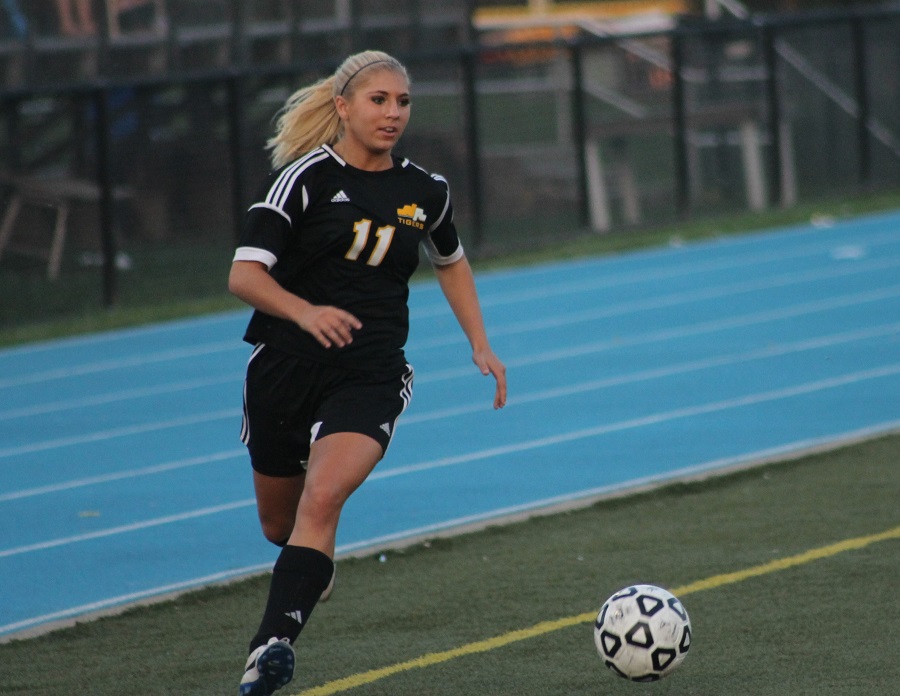 The North Allegheny Girls’ Soccer Team took fifth-seeded Penn-Trafford to the limit on Saturday afternoon, but the Warriors rallied from a 2-0 deficit for a 3-2 overtime win in the opening round of the WPIAL Class AAA playoffs. Senior Casey Aunkst scored the game winning goal on a penalty kick with 5:41 to play in overtime to help the Warriors survive a valiant effort by the Lady Tigers. It will go down as a memorable weekend for Aunkst, who is also a placekicker on the Penn-Trafford football team.  Aunkst kicked a 24-yard field goal in last night’s 17-10 win over Plum for the PT football squad, was named homecoming queen at halftime, and then capped the weekend with the game winning goal for the Warriors against North Allegheny.

As soon as North Allegheny stepped onto the turf at Warriors Stadium, the Lady Tigers were gunning for an upset over favored Penn-Trafford. Aside from NA’s meeting with Penn-Trafford on September 27, a game the Warriors won, 5-1, the teams had not met since the first round of the 2004 WPIAL playoffs.  In that game, the Tigers upset the then-defending WPIAL champion Warriors, 3-0.  North Allegheny was hoping history would repeat itself on Saturday afternoon and it at appeared the Tigers were on their way when Savana Yurick scored in the game’s 3rd minute to put NA on top, 1-0.  Yurick’s goal, her 13th of the season, was assisted by Amanda Miller.

In the second half, North Allegheny added on to the lead with 31:36 on the clock as Brooke Anderson scored her first goal of the year and the score was 2-0, Tigers. Hannah Stoof was credited with the assist on the Anderson goal, a hard shot in the upper left corner of the net from point blank range that beat PT net minder Victoria Anderson.

Undaunted, the Warriors rallied back with a goal by Ryley Watt with 28:10 to play, and a marker by Maggie Mastrogiacomo from 20 yards out that evened the score at 2-2 with 10:26 remaining. The Warriors nearly won the game in regulation but two terrific saves by NA’s Emily Lyon with 8:21 and 3:16 remaining in the contest kept the game tied.  Lyon finished the game with 11 saves. Unfortunately for the Tigers, the Aunkst penalty kick goal in overtime ended the 2014 campaign in sudden death.

Despite the loss, there were several top-shelf performances by the Tigers. One of those came courtesy of defenseman Gabby Smychynsky.  The junior was glued to Division I recruits, Italia Biondi and Casey Aunkst.  Biondi is one of the top scorers in the WPIAL, but Smychynsky did not allow the University of Toledo recruit much space to work with and silenced her for the afternoon.  For her efforts, Smychynksy was named the Wright Automotive Player of the Game.

North Allegheny’s season concludes with a 10-9 record following the opening round loss. Penn-Trafford improves to 17-1-1 and will face the Upper St. Clair Panthers on Wednesday night in the WPIAL quarterfinals.  Congratulations to coach Danielle Borkowski and the North Allegheny Girls’ Soccer Team for an outstanding season.