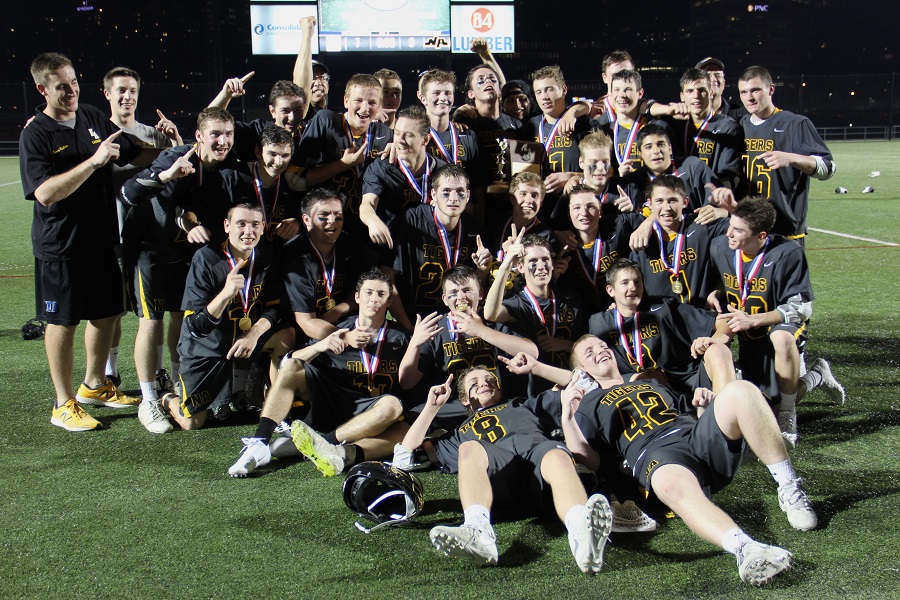 The North Allegheny Tigers won their first ever WPIAL boys lacrosse championship Friday night defeating Mount Lebanon 9-7.  Mount Lebanon defeated the Tigers in last year’s final 9-8 in double overtime, and also won 18-5 early this season.  This night would be different.  Mount Lebanon would control the first four minutes of the match and were finally rewarded with a goal from Brian Ward.  The Tigers would call timeout and from then on things went North Allegheny’s way.  The Tigers would score three goals in 51 seconds and one with just 15 seconds left in period one to take a 4-1 lead.  Scoring two goals each were Gavin Hagen and Wes Powell.  Mount Lebanon scored the first goal of the second period just a minute in and cut the lead to 4-2.  North Allegheny would strike quick again with three minutes left in the half scoring two goals in 8 seconds and led at halftime 7-3.

North Allegheny would maintain the lead in the second half while playing strong defense.  They shut down leading scorer Dan Lee and Brian Ward thanks to Greg Ferringer, Jack Kairys, Doug Wild and Antonio O’Barto. Between these four defense men they had fifteen forced errors and caused havoc all night clogging up the shooting lanes and forcing most of the Blue Devil’s shots wide.  They also received another outstanding performance from goalie Ean Kuska who made twelve saves and was named the Wright Automotive player of the game. Mount Lebanon received four goals in the second half from Connor Brumfield but it was not enough as the Tigers would go on to victory.  North Allegheny will now enter the PIAA playoffs which will start on Wednesday night and face the second seed from District Three.