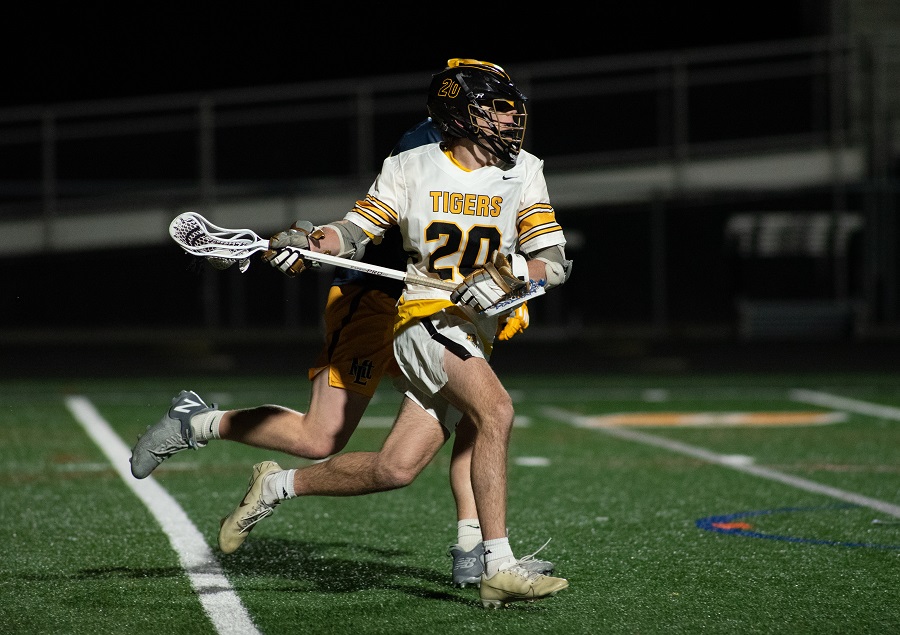 North Allegheny is in a stretch of five games in eight days. After a road loss in Ohio on Friday, the Tigers returned home to defeat Bethel Park 13-9 in a non-section match-up at Newman Stadium.

Sophomore Evan Lyon put the Tigers in front 1-0 on a step out goal 90 seconds into the game. Bethel Park had an extended possession that neared three minutes, but the Black Hawks came up empty. Senior attack Cole Bordo would score his first goal of the night at 6:41 and Marc Bartolomucci also found the net as the Tigers built a 3-0 first quarter lead.

Gavin Banyas caused a turnover early in the second quarter and after picking up the ground ball, he found Bordo for a goal at 1:01 of the second quarter to build the lead to 4-0. Senior Matt Kopp scored his first of three goals on the night to get Bethel Park on the board after a Black Hawks timeout.

North Allegheny rattled off the next five tallies for a 9-1 halftime lead. Banyas scored his 13th of the season shortly after the Kopp goal. Lyon then scored two goals in a row, again on step outs from below the goal line to complete the hat trick. Bordo picked up his third goal at 6:50 and Banyas netted his second late in the quarter to put the Tigers up by eight.

Bethel Park scored a pair of man up goals that were sandwiched around Christian Tedder’s seventh of the year. Bordo picked up his fourth goal of the game before Bethel Park closed out the third with a pair of goals. The Black Hawks outscored North Allegheny 8-4 in the second half.

Freshman Travis Lemark converted a Bordo assist 1:15 into the fourth quarter and Bordo scored his fifth goal of the game at 5:32 to complete the scoring for the Tigers. Among the many players to see action for the Tigers were a trio of goalkeepers. Senior Marc Melanson started and made five saves to keep Bethel Park scoreless in the first quarter. Junior Beck Tauscher played the third quarter while freshman Logan Lyle spent the final twelve minutes between the pipes for the Tigers.

Evan Lyon, with the hat trick and one assist grabbed the Wright Automotive Player of the Game honors for North Allegheny.

The Tigers (3-3, 1-0) return to section play when they visit Central Catholic on Wednesday before traveling to the Kiski School on Thursday for another non-section contest before North Allegheny enjoys a well-earned rest over Easter weekend.