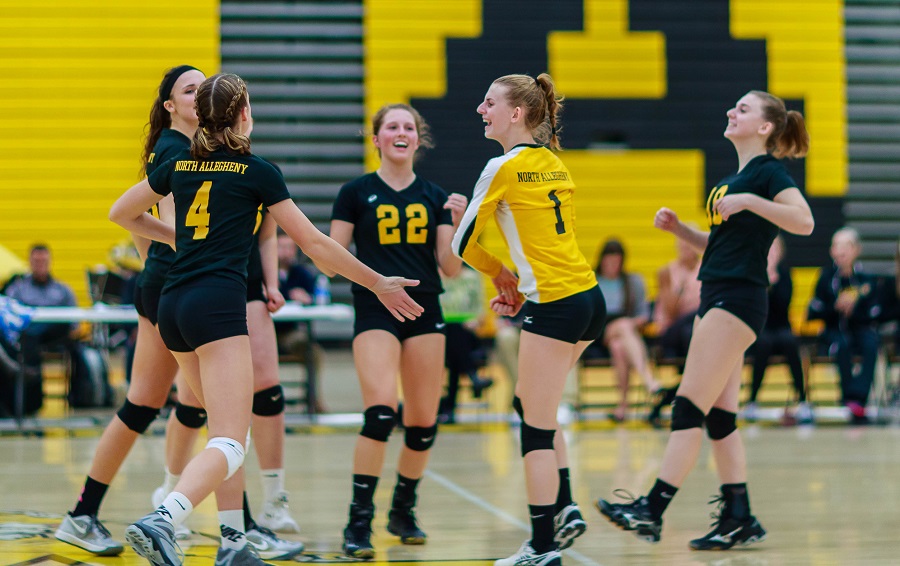 In thrilling come-from-behind fashion, the North Allegheny girls’ volleyball team rallied from a 2-0 deficit and topped the Garnet Valley Jaguars for a 3-2 victory in the PIAA semifinals on Tuesday night. The Tigers punched their ticket to the state championship for the first time since 2008.

North Allegheny steamrolled its way to the PIAA semifinals, losing only four sets all season and not dropping a single set in the entire postseason. That changed on Tuesday night against the reigning state champions.

Garnet Valley used a 6-0 run late in the first set to take a 20-17 lead and outlasted the Tigers for a 27-25 victory. Kutztown University recruit Erin Patterson helped lead the charge for the Jaguars with five kills and junior Emma Rokosky posted four kills and two aces.

In the second set, Garnet Valley trailed 19-16 but again rallied for a 25-23 win. Patterson once more was the catalyst with four kills and Gwen Clark added four kills and two blocks.

With their backs against the wall, the Tigers stormed back and began the comeback with a 25-19 victory in the third set. NA turned the tabled on the Jaguars and Tulane University recruit Kayla Dinkins spearheaded the effort with seven kills and two blocks. Seniors Julia Patzak and Pitt-Johnstown recruit Erin Carmody were also terrific with their defensive play.

The rally continued in the fourth set with a 25-16 triumph to force a fifth and decisive set. With North Allegheny up 13-9 in the fifth set, it appeared that the Tigers would quickly clinch a berth in the state title match. However, Garnet Valley again responded to adversity and led 15-14 and 16-15 with a chance to steal away a win. North Allegheny bounced back by taking three of the next four points courtesy of three kills from junior Anna Sprys to take an 18-17 lead. Patterson posted a kill to draw Garnet Valley even at 18-18, but North Allegheny earned the win with a kill by Eastern Kentucky recruit Mika Logan and a block by Dinkins for a thrilling 20-18 victory in the final set.

For her efforts Dinkins was named the Wright Automotive Player of the Match. Sophomore setter Abby Miller performed admirably and dished out numerous terrific passes to help push NA over the top.

North Allegheny improves to 23-0 on the season with the win. Garnet Valley’s championship run comes to an end with a 19-6 record. The Tigers will participate in the PIAA championship at Richland High School in Johnstown on Saturday at 5:00 p.m.