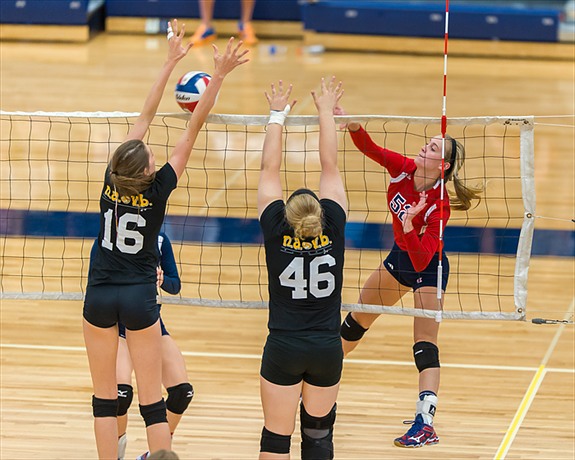 The Lady Tigers entered the WPIAL playoffs as the defending champions but this was a new year, many players had graduated and several have battled or fell to injury. However, each week head coach Heidi Miller and her squad have worked and experimented to find the right formula.  As the #8 overall seed in this year’s Class AAA tournament, the Tigers would have their work cut out for them.  Last week NA opened with a victory over ninth-seeded Bethel Park in what was a rematch of last year’s final.  Tuesday night, North Allegheny faced the top-seeded and undefeated Lady Titans and knocked off Shaler for a 3-1 victory and a trip to the WPIAL semifinals.

North Allegheny started the first game strong with quality net play by junior Annika Chang and senior Meg Morningstar. Freshman Piper Morningstar set the tempo for the evening by totaling 30 assists.  The game would go back and forth on the scoreboard but the Tigers held on to win 25-22.

In the second game the Lady Tigers trailed early and often and it appeared that Shaler had begun to find its stride, grabbing an 18-10 lead. NA refused to let up, and at 17-20, Tayler Ricketts served to set up five straight points to give the Tigers a lead they would not relinquish. After stringing together 15 of 19 points, NA won the second game, 25-22.

Trailing two games to none, the Lady Titans, led by senior Annie Bozzo, fired on all cylinders facing elimination. Bozzo mounted a strong effort in all facets of the game especially from the service line and took game three by a score of 25-13.

Game four was a see-saw battle like the others. The Lady Tigers held a 17-15 lead when Bozzo struck a cross court spike that went wide. After some discussion amongst the officials it was ruled that the ball was tipped at the net and that sent Bozzo back to the line for Shaler who now trailed, 17-16.  Bozzo struck a hard diving serve that was nicely dug by freshman Erin Carmody and the Tigers took the point and the serve.  That would be a huge swing in momentum and NA never looked back. The game finished with Lauren Swartz recording her only block on the evening when she went up and rejected a last-ditch effort of a Bozzo spike and the Lady Tigers sealed the game, 25-20.

As the stats showed, the Lady Tigers used a solid all around team effort this evening as four Tigers tallied double-digit digs against a strong Titan offensive attack. Lauren Doak led the way with 12, Cayla Donahue had 11, while Chang and Piper Morningstar had 10 a piece.  Meg Morningstar led the offense with 17 kills and 2.5 blocks and for her efforts was named the Wright Automotive Player of the Game.

With the 3-1 victory the Lady Tigers advance to the WPIAL semifinals on Thursday against the fourth-seeded Mt. Lebanon Blue Devils at a time and site to be announced. The game will be broadcast on the North Allegheny Sports Network.