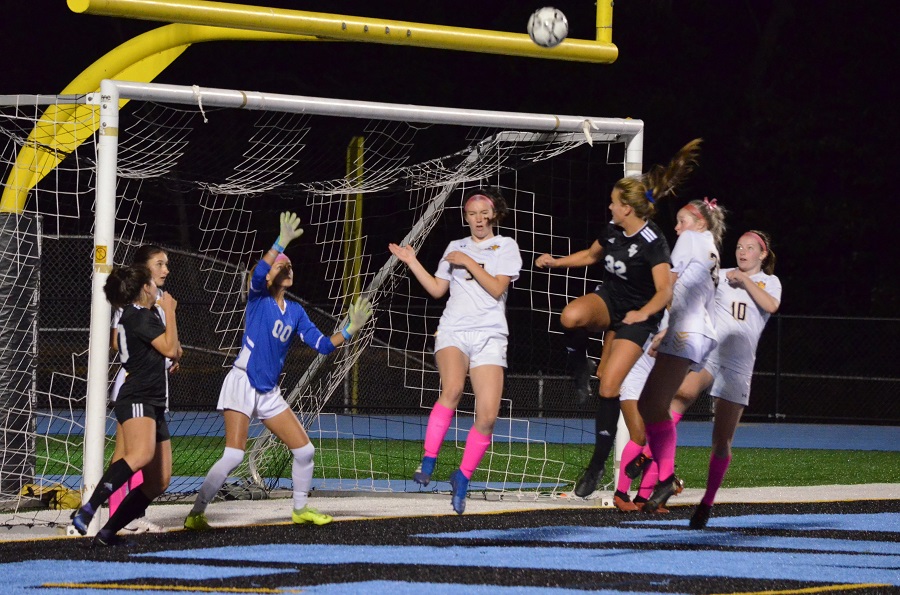 In a battle of the top two teams in Section 1-AAAA, it was the Lady Tigers coming out with a dominant 3-0 victory giving them a stranglehold on the section title.

North Allegheny got off to a great start by scoring ten minutes into the game. Senior Ava Ruppersberger was able to beat two defenders and put a left-footed shot in the top right corner that beat Seneca Valley keeper Morgan Sinan to give the Lady Tigers a 1-0 lead. With 3:12 left in the half, Sarah Schupansky had a break away when Sinan came all the way out of the net and clipped Schupansky. The refs gave Sinan a red card, forcing her exit for the remainder of the game and the Raiders were down to ten players. The red card also gave North Allegheny a free kick from 27 yards out that was buried by Emma Bundy to give the Lady Tigers a 2-0 lead. It was Bundy’s seventh goal of the season and North Allegheny led 2-0 at the half. Madison Vukas was huge in the first half, making seven saves and shutting down all offensive chances for the Raiders.

The second half was a defensive struggle but with 11 minutes to go in the game Schupansky got a great feed from Ellie Wrigley and was able to score her 13th goal of the season and put the game out of reach, giving the Tigers a 3-0 lead, which would be the final score. The defense only allowed one shot on goal in the second half.

Vukas was Wright Automotive Player of the Game making eight saves and picking up her fifth shutout of the season.

The win improves the Lady Tigers record to 11-1-1 and 9-0 in the section. Seneca Valley falls to 10-3-1 overall and 7-3 in Section 1-AAAA. North Allegheny will be back in action Monday at home against Fox Chapel. You can listen to that game right here on the North Allegheny Sports Network at 7:30 pm.