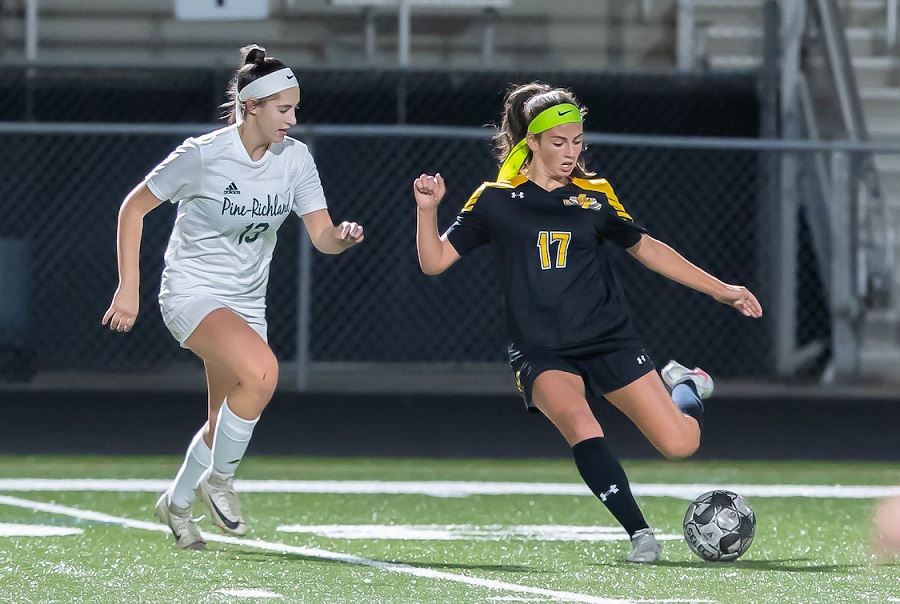 Despite being the defending WPIAL Champions, North Allegheny came into their game Monday night ranked second in the WPIAL in the Pittsburgh Post-Gazette girls soccer rankings behind Pine-Richland. The Tigers left zero doubt who the team to beat still was by game’s end as NA dominated the Rams for 80 minutes, coming out with a 6-1 statement win.

The Lady Tigers wasted no time getting on the board when three minutes in Sarah Schupansky found Lucia Wells streaking down the left side. Wells buried the shot and North Allegheny had the early 1-0 lead. Three minutes later Pine-Richland thought they had the equalizer when Ava Boyd had a point blank opportunity but NA keeper Julianna Werner made a great diving save keeping the game at 1-0. North Allegheny rode that momentum to score three goals in a 10 minute span, the first one by Sophia Palermo and the next two by Schupansky and the Lady Tigers had a 4-0 lead with ten minutes left in the half. The lone blemish of the game came with seven seconds left in the half when Manon Prokesch headed a free kick in for the Lady Rams and North Allegheny led 4-1 at the half.

NA wasted no time getting the goal back when Anna Bundy made a terrific open field move on a Pine-Richland defender and the beat Pine-Richland keeper Katherine Kelly for a marker and a 5-1 lead. Wells added her second goal of the game late in the half for good measure and when the final horn sounded the Lady Tigers had a 6-1 statement win. Megan Miller was the keeper in the second half and did not allow any goals.

For her efforts, Schupansky was named the Wright Automotive Player of the Game compiling two goals and two assists. She harassed the Lady Rams defense all night with a plethora of shots on goal and near misses, as well as setting up some of her teammates for scoring opportunities.