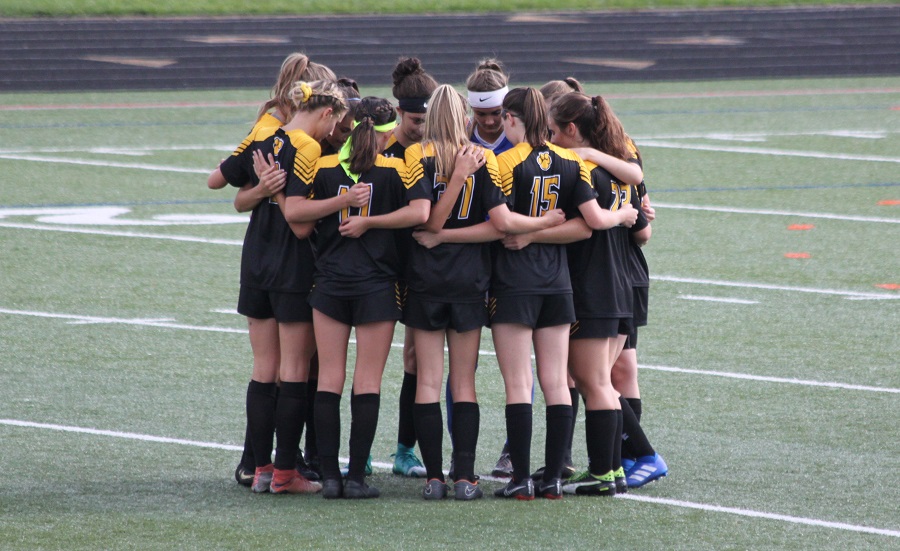 The North Allegheny girls’ soccer team welcomed the defending WPIAL champs Penn-Trafford Warriors to Wright Field at Newman Stadium. It was a rematch of a 2017 PIAA First Round playoff game won by North Allegheny. This time it was the Warriors of Penn-Trafford coming out on top with a 1-0 win.

The first scoring chance of the game came from Penn-Trafford when they got a clean shot from about 30 yards out. This was stopped by a diving save from Madison Vukas and the game early on remained scoreless. A minute later though, following a Lady Tiger foul, Penn-Trafford got a free kick from 40 yards out. The free kick deflected off of a Warriors head and right onto the foot of Malia Kearns at point blank range. Kearns buried it and Penn-Trafford had the 1-0 lead midway through the first half.

Two minutes after that Kearns forced a turnover and had another point-blank chance but Vukas was up to the task and made the save. North Allegheny’s offense started to find a rhythm and it looked like they might have tied it when Sarah Schupansky chipped a shot over Warriors’ goalkeeper Megan Geisey but the ball hit off the crossbar and Penn-Trafford kept the lead. Kearns once again looked like she was going to get on the board when she got a perfect through ball and had a break away but Vukas cut down the angle and was able to stop the shot, keeping the deficit at one for North Allegheny. With five minutes to go in the first half, Ava Ruppersberger got a clean shot from 15 yards out but once again it hit the crossbar. Heading into the half, North Allegheny had dominated time of possession but were losing on the scoreboard 1-0.

The second half saw Penn-Trafford play keep away and a very defensive style. North Allegheny got shots on goal from Alex Adams and another from Schupansky. With 8:05 remaining in the game, North Allegheny got four straight corner kicks and on the fourth one Ruppersberger put a shot on goal but it was saved by Geisey. Penn-Trafford possessed the ball for the rest of the game and ended up winning 1-0.

Vukas was named the Wright Automotive Player of the Game, making four saves on five shot attempts and making plenty of big plays in the first half to keep the Lady Tigers in the game.

The Lady Tigers fall to 7-5 overall and will be back in action tomorrow at Hempfield. Kickoff is set for 5:30 pm. They return to section play next Monday at Fox Chapel on a game that will be broadcast live by the North Allegheny Sports Network.