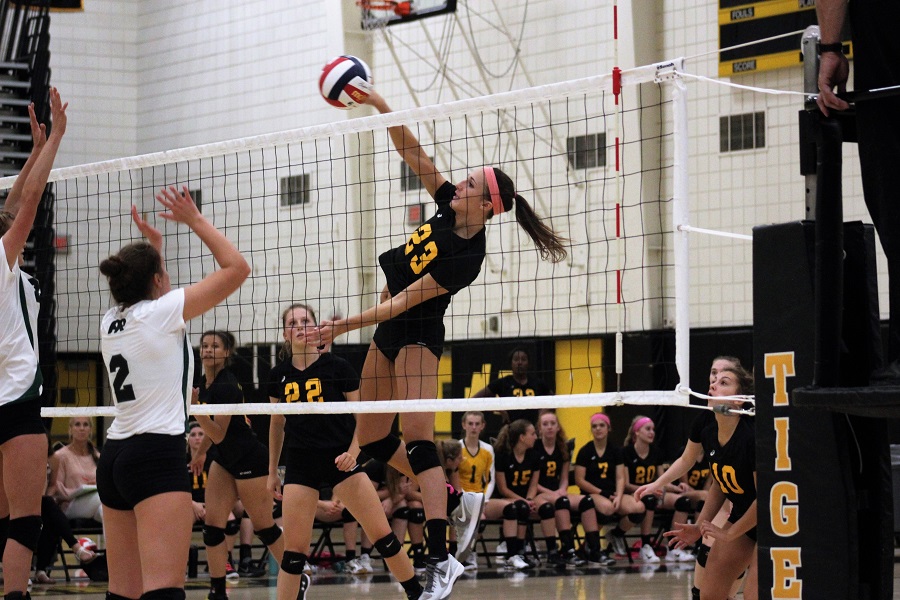 The North Allegheny girls’ volleyball team, who has already clinched a playoff berth, kept its strong season going by dominating Pine-Richland from start to finish with a 3-0 win. The Tigers earned the win by set scores of 25-14, 25-10, 25-15. North Allegheny never trailed in the game.

It was a total team effort as all 19 players checked into the game and eight players recorded kills. Kayla Dinkins played above the net all night and led the Lady Tigers with nine kills and added eight blocks. Paige Miller had eight kills, Avery Tuman and Mika Logan each had five kills and Anna Sprys, Abby Miller, Kristen Chomos and Josie Wadlow all had a kill each to help the Lady Tigers effort.

The most impressive part of the night was the serving by the Lady Tigers as they combined for seven service aces as a team. Paige Miller and Allena Carmody each had two aces while Grace Flanders, Malia Duffy and Paige Morningstar all picked up aces.

North Allegheny keeps the perfect season alive, improving to 11-0 and 7-0 in the section. Pine-Richland falls to 6-3 overall and 4-3 in the section. The Lady Tigers will be back in action on Tuesday at Seneca Valley at 7:00 pm. The match will be video streamed live via pay-per-view by the North Allegheny Sports Network. The watch the broadcast, click here.