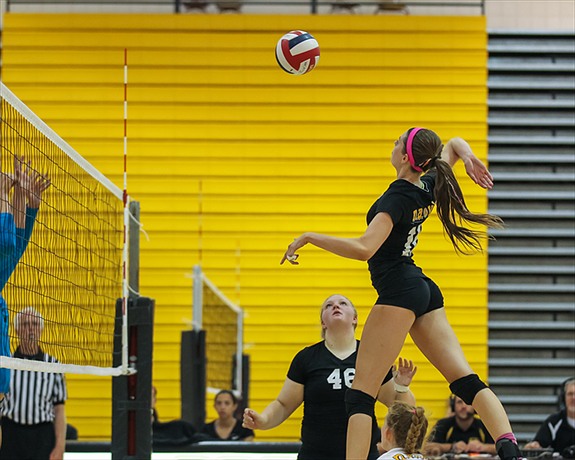 Using a collective effort from up and down the lineup, the North Allegheny Girls’ Volleyball Team punished the Hampton Talbots on Thursday night, 3-0, in a Section 3-AAA match. The Talbots, who have not won a section contest since 2010, were outmatched by the Tigers who asserted their dominance in the opening set and coasted with set scores of 25-9, 25-19, and 25-14.

In the opening set, the Talbots trailed only 5-4 before the Tigers rolled off 15 of the next 16 points to take command. Leading the first set for NA was junior Annika Chang with six kills, and senior Bree Blair with five kills.  North Allegheny’s game changing run was also set up by the fine serves of Tayler Ricketts and Lauren Doak.

After winning set one by a 25-9 score, the Tigers cruised in sets two and three as NA head coach Heidi Miller utilized every member of her active roster on senior night. In a match where so many Tigers made a contribution, it was the consistent effort of Notre Dame-recruit Meg Morningstar that earned her Wright Automotive Player of the Game honors.  Morningstar delivered seven kills and several blocks to steady the Tigers attack from start to finish.  The sets from younger sister Piper Morningstar were also important to the NA win.

North Allegheny improves to 9-6 overall and 8-3 in Section 3-AAA. Hampton remains winless on the season at 0-12 overall and 0-10 in section play. The Lady Tigers round out their section schedule next Thursday with a visit to North Hills.  Start time is slated for 7:00 pm.