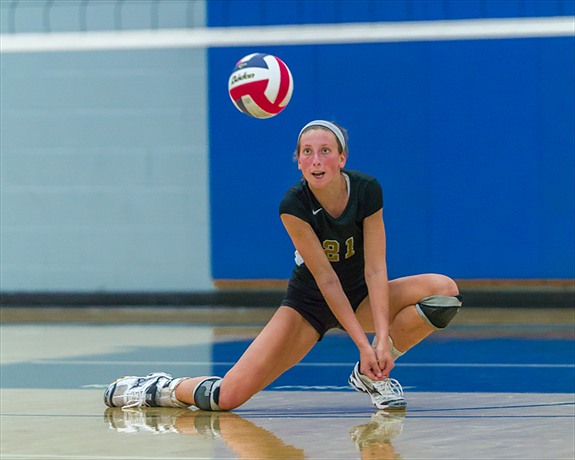 The top-ranked North Allegheny girls volleyball team earned a hard fought 3-1 victory over second-ranked Pine Richland Thursday night to remain undefeated and take over sole possession of first place in section play.  The Tigers lost the first set, 25-22, but won the next three 27-25, 25-19 and 25-23.

In the first set neither team led by more than three points before the Rams would pull away from an 18-18 tie.  Erin Swartz and Meg Morningstar had three kills apiece.  The second game was just as close with the Tigers and Rams tied at 16-16.  The Tigers scored four straight before the Rams would score six in-a-row to take a 22-20 lead.  However, kills by Morningstar and Swartz tied the score at 23-23.  Each team then had service errors and unforced errors and the score was tied at 25.  Danielle Wall came up with a huge kill to, take the lead and the Rams made a net violation to give the Tigers set two.

Set three is where Jessica Samuels would assert herself, along with strong play from Jamie Robatisin, and the Tiger never trailed in set three.  Set four was much like the first two games.  The Rams held a 20-16 lead before the Tigers roared back with six straight points to take charge and hold on to victory. Jessica Samuels garnered the match ending point and was named the Wright Automotive player of the game for her performance.

North Allegheny improves to 6-0 overall and 5-0 in Section 3-AAA.  Pine-Richland falls to 4-1 overall and 3-1 in the section. The Lady Tigers next match will be on Tuesday against North Hills.