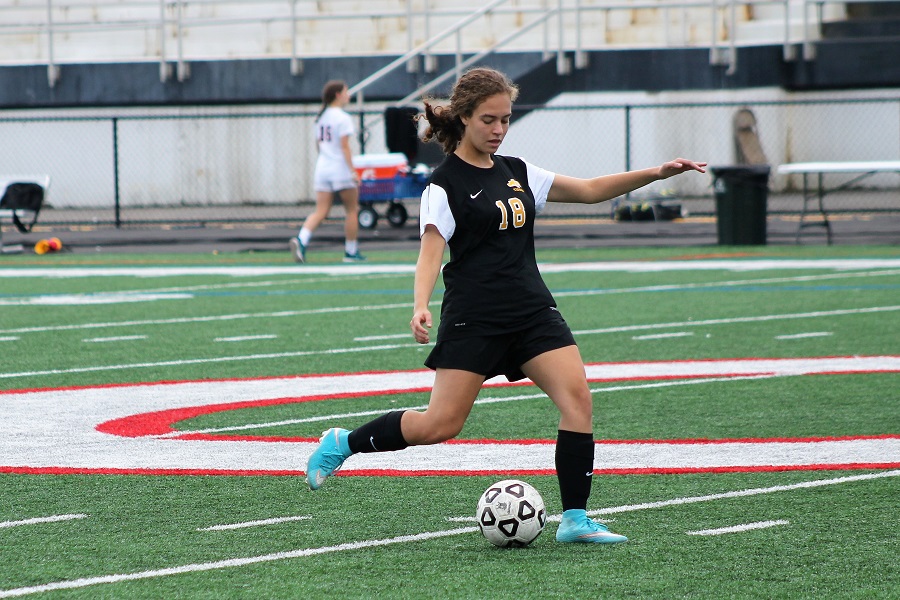 The Lady Tigers of North Allegheny took to the pitch on a soggy Wednesday evening in Shaler township to battle the Lady Titans of Shaler High School.  The remnants of Hurricane Irma did little to slow down the potent offensive attack as North Allegheny routed the Titans, 6-1.

It only took 55 seconds for North Allegheny to open the scoring in its Section 1-AAAA contest.  Morgan Anderson ended an offensive flurry in the first minute, burying an Emma Bundy pass behind the Shaler Keeper. Bundy picked off a shallow goal kick from the Shaler keeper and skipped it by the Titan’s net minder for her first goal of the match at the nine minute mark.  NA controlled the flow of the game for the rest of the half, cultivating a Kaley Chomyn unassisted goal in the 37th minute, making it 3-0 at the half.

The rain ended after half time, but not the NA Lady Tiger’s onslaught.  Alex Adams took an Anderson pass and did what Alex Adams does, scored a goal.  Her tally made it 4-0 at the five minute mark.  Bundy added her name to the scoring sheet again with her second goal of the game.  The defense, led by Caroline Noel, were smothering once again.  Olivia Ruppersberger and Julia Correa continued their dominance between the pipes combining for a three-save, first-half shutout.

Freshman Maddie Vukas started the second half in the net and was impressive, stopping 5 of the 6 shots she faced.   With the game well in hand, even after a Shaler goal off a corner kick at 29:45 of the second half, the Tigers were able to put one more in the back of the net.  A hard shot from Hannah Kirkpatrick deflected off the goalie onto the waiting foot of freshman Sarah Shupansky.  Shupansky wasted little time tickling the twine for the Lady Tiger’s sixth goal of the night.

The Lady Tigers are in action when they participate in North Allegheny’s Soccer Fest on Saturday at Newman Stadium.  The festivities run all day so come out and support both the NA boys’ and girls’ soccer clubs.  The Lady Tigers will be taking on the Lady Talbots of Hampton at 3:30.