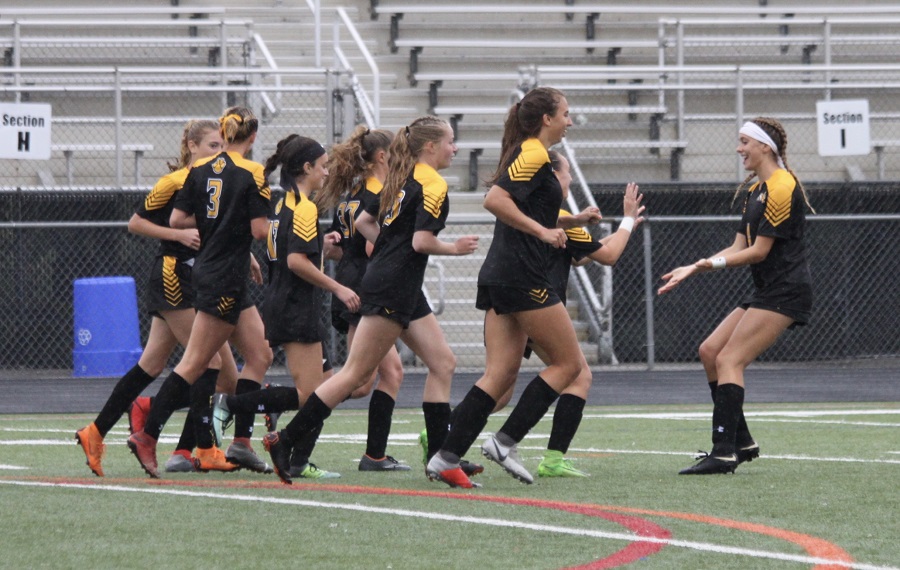 On a cold and rainy day at Newman Stadium, the Shaler Area Titans were looking for their first section win of the year.  The North Allegheny Lady Tigers were looking to continue their winning ways. It was North Allegheny who extended its winning streak to three in a row to begin the 2018 season with a 5-0 blowout of Shaler.

Seventeen minutes into the game, junior Bella Pietropola found a wide-open Emma Bundy who buried what would ultimately become the game winner for a 1-0 lead.

The second goal came later in the frame when senior defender Caroline Smith sent a ball towards the Lady Titan’s goaltender.  The ball found its way in for a 2-0 Tigers lead.  The North Allegheny defense held the Lady Titans without a shot in the first half as the offense led by junior Ava Ruppersberger, sophomore Sarah Schupansky, Adams, Bundy, and Pietropola, controlled the play and time of possession in the Titans’ end.

The rain continued to come down at the start of the second half and the Lady Tigers continued their onslaught, peppering the Titans’ goal tender with chance after chance.  Bundy thought she had her second goal of the game, but a pesky crossbar got in the way.  The ball landed on the hard charging foot of senior Jordan Bourkab who slipped it past for a 3-0 lead.

Junior Hannah Kirkpatrick muscled her way down the wing and added her first of the season off of a feed from sophomore Grace Billman for a 4-0 advantage.  Kirkpatrick returned the favor a few minutes later, feeding Billman for her first goal of the season and a 5-0 lead on a beautiful shot that sailed over the goaltender’s outstretched hand and just under the crossbar.

The defense as a whole banded together to limit the shot output in the second half to two.  Leading the way on defense were senior Caroline Noel, senior Jetta Kroll, juniors Riley Miara and Natalie Mudd, sophomore Tulasi Syamala, and Smith.

The win moves the Lady Tigers to 3-0 on the young season and 2-0 in the section.  They will once again be tested on Wednesday when they travel 20 miles north to face the Raiders of Seneca Valley.  Like the Tigers, the Raiders are a perfect 3-0 overall and 2-0 in Section 1-AAAA. The game will be broadcast live via the internet on the North Allegheny Sports Network.