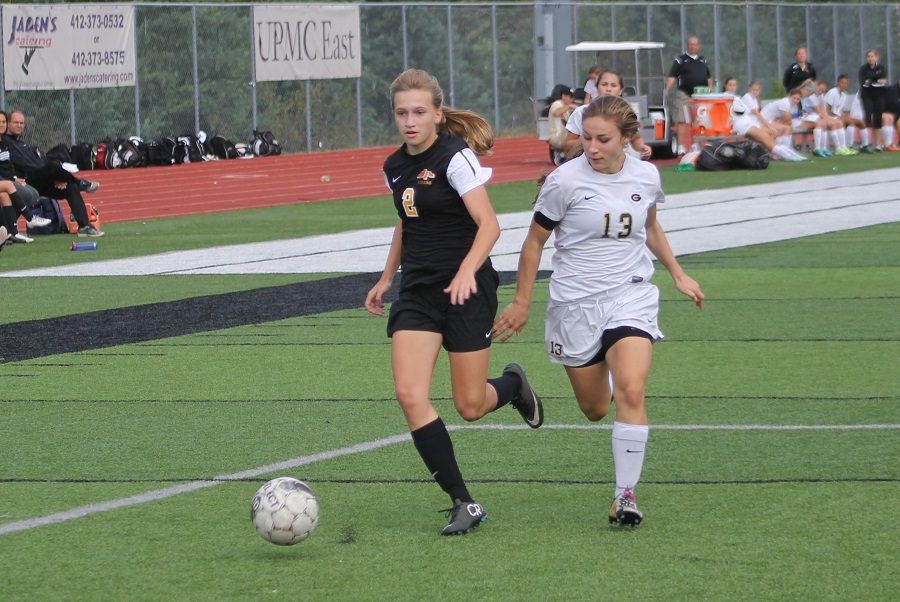 At a gray and cloudy NexTier Stadium on Monday night, the North Allegheny girls’ soccer team upended the two-time WPIAL champion Seneca Valley Raiders, 3-1. Sophomore Morgan Anderson scored two second half goals to propel the Lady Tigers to the victory and pull NA into a second-place tie with Seneca Valley in the Section 2-AAA standings.

Prior to an early September loss to Pine-Richland, the Raiders had not lost to a WPIAL opponent in 37 straight games. To be the second team to beat the reigning champions this season, the Tigers knew they had to start off strong on the road. North Allegheny thwarted early pressure and three corner kicks by the Raiders before freshman Alex Adams created the first break of the game. In the 11th minute, Adams took the ball from 40 yards out, dribbled to the middle of the 18 yard box and scooted a shot into the Seneca Valley net for a 1-0 lead.

Seneca Valley responded in the 16th minute with a goal by Caroline Miller on a rebound to tie the game at 1-1. Miller notched a hat trick the last time the Raiders faced the Tigers back on September 9, but her goal in the 16th minute of this game was the last for any SV player.

The game was hotly contested in the second half and it looked like the Tigers might break through within the first 10 minutes, but two great scoring chances by Amanda Miller were denied by the Raiders net minder. However, in the 53rd minute Adams dribbled through the Raiders again and sent a pass to Morgan Anderson who finished the play with a shot in the upper left corner of the net to give North Allegheny a 2-1 lead.

NA maintained and expanded the lead in the 79th minute when Brooke Anderson played a ball to Morgan Anderson for a goal and the Tigers held an insurmountable 3-1 advantage.

North Allegheny improves to 7-2 overall and 5-2 in Section 2-AAA. Meanwhile, Seneca Valley slips into a second-place tie with the Tigers and own an identical record. The Lady Tigers will try to win their fifth straight when they host Hampton on Wednesday night.