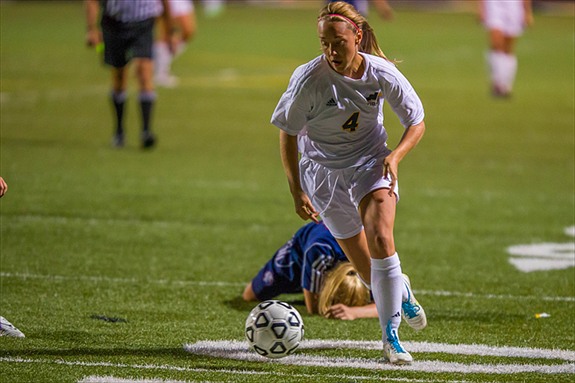 Behind five second-half goals, the North Allegheny Girls Soccer Team pulled away from Shaler and scored a dominating victory in the section opener for both teams Wednesday night. North Allegheny received contributions from a host of players, as seven different Lady Tigers scored en route to a 7-0 victory at home over the Titans.

Aside from a single Shaler shot, North Allegheny controlled the play throughout the first half. Eventually, more than 26 minutes in, junior midfielder Savana Yurick poked home a loose ball in front of the net to give the Lady Tigers a lead they would never relinquish.

With just 5:29 remaining in the first half, North Allegheny added to their advantage. Sophomore midfielder Marina Thornton took a corner kick along the ground that was easily knocked away by a Shaler defender. However, the Titans were not out of danger, as the ball popped right back out to Thornton. This time, she delivered a cross right on the foot of senior captain Emily Lyon, who was still pushed up from the corner just moments earlier. Lyon had time to bring the ball down to her feet inside the six-yard box and bury it in the back of the net.

Up 2-0 coming out of the break, the Lady Tigers took complete command of the contest in the first 10 minutes of the second half. Sophomore forward Amanda Miller beat the Shaler goalkeeper on a shot to the left corner of the net just 3:29 into the half. Then, less than five minutes later, senior Angela Marsico took another quality feed from Thornton, walked right down the left side of the box and beat the keeper on a shot to the right corner of the net.

From there, the rout was on, as the Lady Tigers rounded out the scoring with goals from senior Lauren Smith, sophomore Elena Young (assisted by junior Sarah Chomos) and junior Maria Gonchar.

North Allegheny also had a decided advantage in the shot department, registering 32 to Shaler’s five. Sixteen of the Lady Tigers’ shots were on goal, compared to just one for the Titans. The hosts also took eight corners, while Shaler ended the contest with just three.

Thornton’s two assists highlighted an all-around solid performance by the sophomore midfielder, as she earned Wright Automotive Player of the Game honors for her efforts.

With the victory, North Allegheny improves to 1-0 in Section 2-AAA play and 2-0 overall. They’re next in action on Saturday afternoon when they take on Erie’s Villa Maria at 12:30 p.m. at Newman Stadium. The Lady Tigers then return to section play on Monday night at Pine-Richland in an important early-season clash with the Rams. Kickoff for that contest is set for 7:30 p.m.