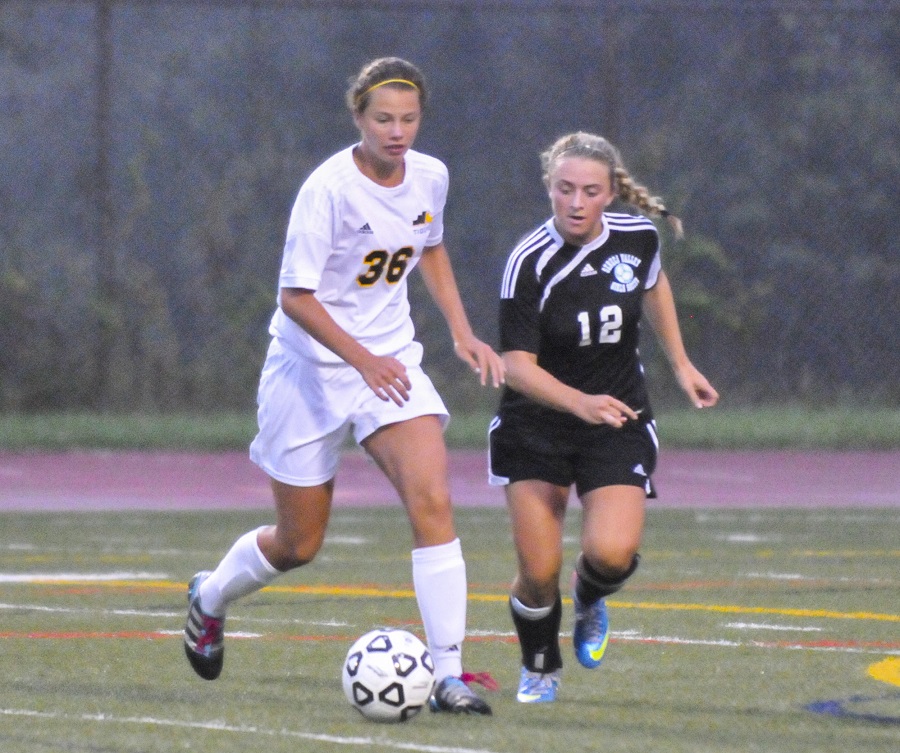 A quick goal by Marina Thornton gave North Allegheny the lead early, and two goals by Amanda Miller put North Hills away late as the Lady Tigers earned a 5-2 victory on Wednesday night at Newman Stadium. The win was the 10th straight for North Allegheny over its rivals from West View.

The Lady Tigers wasted little time against the Indians with a goal by Thornton just 49 seconds into the game. The marker by Thornton came on a header and was set up on a fine crossing pass by Gabby Smychynsky as NA built a 1-0 lead.  Nine minutes later, Miller stole the ball from an Indians defender and played a great pass across the goal to senior Michelle Bourkhab who finished off the play on the North Hills door step for a 2-0 advantage.

The score remained 2-0 until a free kick was awarded to North Hills in the 44th minute in the second half when junior Brianna Witherel was injured in the Tigers box. Indians junior Rachel Haig capitalized on the opportunity from just five yards away and scored a top shelf goal to cut the score to 2-1, Tigers. North Hills nearly tied the game moments later as the Indians were suddenly fanned to life after being smothered by the Tigers defense throughout much of the game.

However, the North Hills rally was short-lived thanks to a goal by NA’s Savana Yurick with just over 20 minutes to play that increased the Tigers lead to 3-1.  Less than three minutes later, Miller blistered a rifle shot past NH net minder Allyson Trainer to bring the score to 4-1, North Allegheny.  Miller struck again in the 66th minute courtesy of a long feed from Yurick, putting the game on ice at 5-1, Tigers.  For her efforts, Amanda Miller was named the Wright Automotive Player of the Game by the North Allegheny Sports Network.

North Hills closed the scoring with 2:20 to play on a marker by Jenna Buchlmayer to bring the final score to 5-2.

Following the win, North Allegheny sits at 6-2 overall and 5-1 in Section 2-AAA. North Hills drops to 2-6 overall and 1-5 in section action. The Lady Tigers open the second half of the soccer schedule on Saturday afternoon with a prime battle with the top-ranked Seneca Valley Raiders.  Kickoff is scheduled for 2:30 from Newman Stadium.