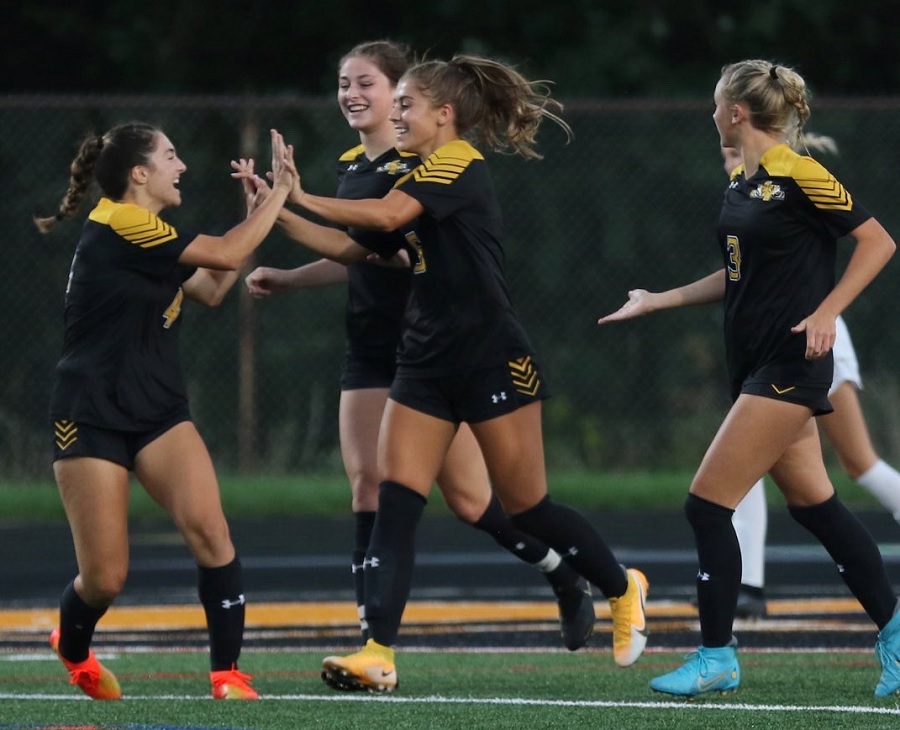 Heading into Wednesday night’s game, 11 of the last 13 meetings between North Allegheny and Butler had been decided by one goal, with six of those games going to overtime. It was more of the same at Newman Stadium in this hotly contested rivalry as the Tigers prevailed, 4-3. Senior Anna Bundy netted the game-winning goal with 1:50 remaining to keep NA undefeated. The victory also extended NA’s section unbeaten streak to 17 consecutive games.

The Tigers pounced on the Tornado immediately as junior Abigail Stager scored just 27 seconds into the game for a 1-0 lead. Butler answered back, however, with 31:14 left in the first half on a goal by senior Sam Miller knotting the score at 1-1.

The Tigers had the better of the possession time in the remainder of the half and had several great scoring chances, including an opportunity for junior Jadyn Coy. With 21:30 left in the half, Coy let loose a hard shot that appeared ticketed for the bottom right corner of the net, but Butler goalie Delaney Yaracs made a great diving save to keep the score deadlocked. North Allegheny continued to pressure and eventually cashed in with 5:06 remaining before halftime when junior Libby Earley raced down the left wing and directed a pass in front to senior Allie Burns for a 2-1 lead.

Twelve minutes into the second half, Butler’s Kat McGuire steered a free kick from 35-yards out on net but junior goalie Natalie Rak made the stop to maintain NA’s one-goal advantage. Minutes later, junior Madison Rose was denied on a fine leaping save by Rak. However, Butler’s persistence paid off when Rose scored from 25-yards out with 25:25 left in the second half to even the score at 2-2.

The deadlock was short-lived as senior Sophia Palermo streaked down the right wing and centered a pass into the goal box that Stager punched into the Butler net for a 3-2 lead with 25:09 to play.

With 15:37 remaining, Miller scored her second of the night and capitalized on a corner kick with a header goal to tie the game at 3-3.

Undaunted, the resurgent Tigers continued to apply pressure in the remaining minutes and Butler eventually buckled with 1:50 left as Stager deftly tapped a left-footed pass near the top of the 18 for a shot that Bundy buried for a 4-3 lead and victory. With two goals and an assist, Stager was named the Wright Automotive Player of the Game.

With the win, North Allegheny improves to 5-0 overall and 3-0 in Section 1-AAAA action. Butler slips to 1-2 overall and 0-2 in the section. The Tigers will visit McDowell on Saturday for a non-section meeting with Trojans at 3:00 p.m.