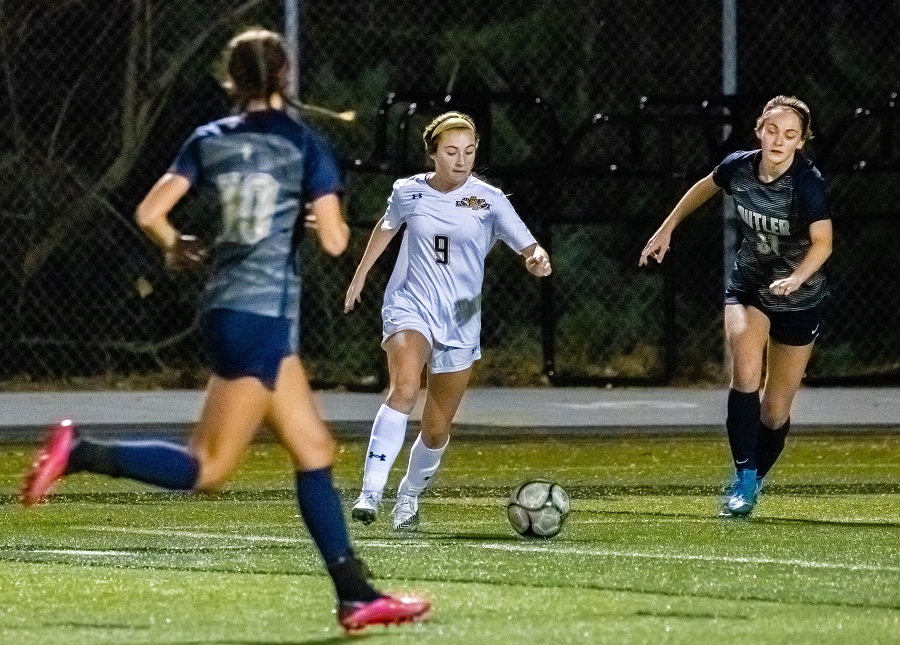 The North Allegheny girls’ soccer team punched its ticket to the PIAA semifinals for the first time in program history with a 5-1 win over McDowell in the PIAA quarterfinals on Saturday at Hampton High School.

Appearing in the quarterfinal round for the second consecutive season, the Lady Tigers withstood and early offensive charge by the Trojans. McDowell applied strong pressure in the first five minutes and produced two corner kicks. Despite the McDowell momentum, the Tigers weathered the storm thanks to the defensive play of Kena Shannon, Alexa Spano, Olivia Mark and Tulasi Syamala.

The North Allegheny offense sprung to life shortly thereafter and scored the game’s first goal on a marker by senior Sarah Schupanksy, assisted by sophomore Lucia Wells, for a 1-0 lead with 31:26 left in the first half.

Following the Schupansky goal, neither team found the back of the net in the first half and the score remained 1-0, North Allegheny, at intermission.

Early in the second half, Wells was awarded a penalty kick and the sophomore capitalized for the goal 3:26 into the half for a 2-0 lead.

McDowell crept back into the game when Abigail Faulhaber scored with 28:24 left in the second half, cutting the NA advantage to 2-1.

With 25:53 remaining, the Tigers gained a stranglehold of the contest on a terrific goal by Wells. The speedy sophomore streaked down the left wing, cut into the middle of the field and let loose a shot from 20 yards out that tickled the back of the McDowell net and NA led, 3-1.  With two goals and an assist, Wells was selected as the Wright Automotive Player of the Game.

The Tigers controlled the contest the rest of the way and added goals by Schupansky with 17:18 left, and Ally Ruiz with 3:25 remaining, to close out a 5-1 victory.

With the win, North Allegheny 12-2 on the season and advances to the PIAA semifinals to face the Cumberland Valley Eagles on Tuesday night. The game will be broadcast live by the North Allegheny Sports Network.