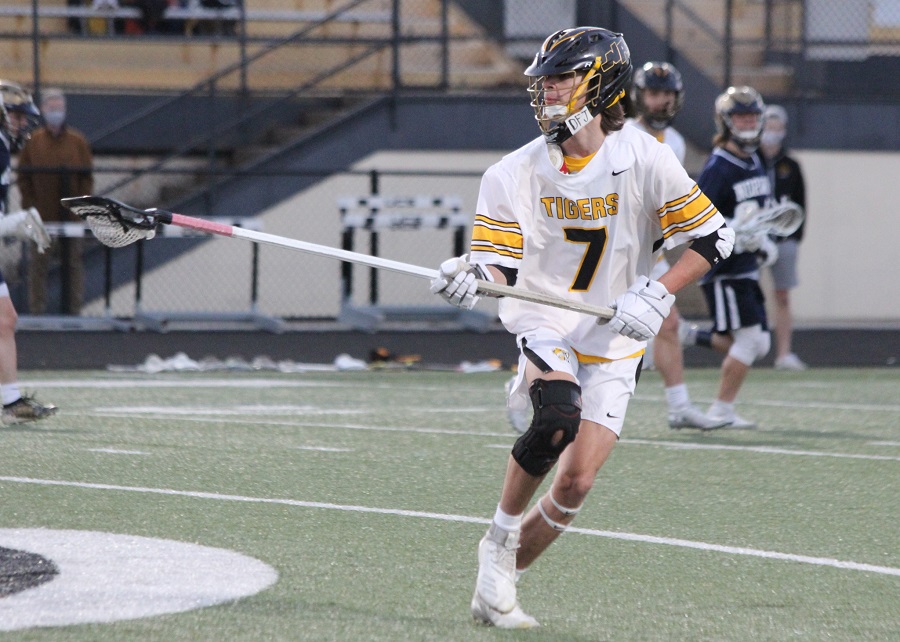 Appearing in the WPIAL playoffs for an 8th consecutive season, the North Allegheny boys’ lacrosse team claimed a 14-7 victory over the Bethel Park Black Hawks in the WPIAL quarterfinals at Mt. Lebanon High School. Since 2006, the Tigers and Black Hawks have met annually in the regular season. Including three postseason matchups, North Allegheny extended their head-to-head winning streak over Bethel Park to 18 in a row with the victory on Thursday night.

On a blazing hot evening in the South Hills of Pittsburgh, the game began with a quick pace as each team traded barbs in a seesaw first period. Sophomore Marc Bartolomucci scored first at the 3:51 mark, only to be answered by Bethel Park’s Troy Volpatti on a man-up goal at the 5:10 mark of the period. At the 5:52 mark, senior Ben Rohan tallied the first of two goals on the night for a 2-1 lead. The advantage lasted only 34 seconds as BP’s Kyle Mattola struck back to tie the game at 2-2. In the final minute of the period, Mattola scored again to give the Black Hawks a 3-2 lead with 33 seconds remaining. However, a man-up goal by Cole Bordo evened the score at 3-3 with just five seconds to go in the first quarter.

Bethel Park started the game with a tightly-packed zone defense, which slowed NA in the first period, but were forced to a man-to-man defense in the second period that the Tigers picked apart. The quick first step of Rohan was uncontained by Bethel Park which led to a bevy of scoring chances, sparking an 8-0 run that stretched to the midway point of the third period. Rohan finished with two goals on the night and dished out two assists, earning Wright Automotive Player of the Game honors.

Another key factor to the NA run was faceoff man, Ryan Barry. The junior middie dominated the X and was a true X-Factor, giving the Tigers a definite edge in possession time. Sophomore long-stick middie Marco Pascarella was another key figure on ground balls and scored a goal as well.

With North Allegheny leading 10-3, Bethel Park stopped the run with a man-up marker by Kyle Mattola, but the Tigers answered with back-to-back goals from freshman Evan Lyon and Bordo to bring the score to 12-4 at the end of the third period. Mattola led BP in goals with four in a losing effort.

Bethel Park outscored North Allegheny in the fourth quarter, 3-2, but by that time it was too little, too late, as the Tigers closed out a 14-7 triumph.

North Allegheny improves to 10-4 overall and advances to face Mt. Lebanon in the WPIAL semifinals on Monday night at a site and time to be determined. The game will be broadcast live via the internet on the North Allegheny Sports Network. Bethel Park’s season ends with a 10-6 overall record.