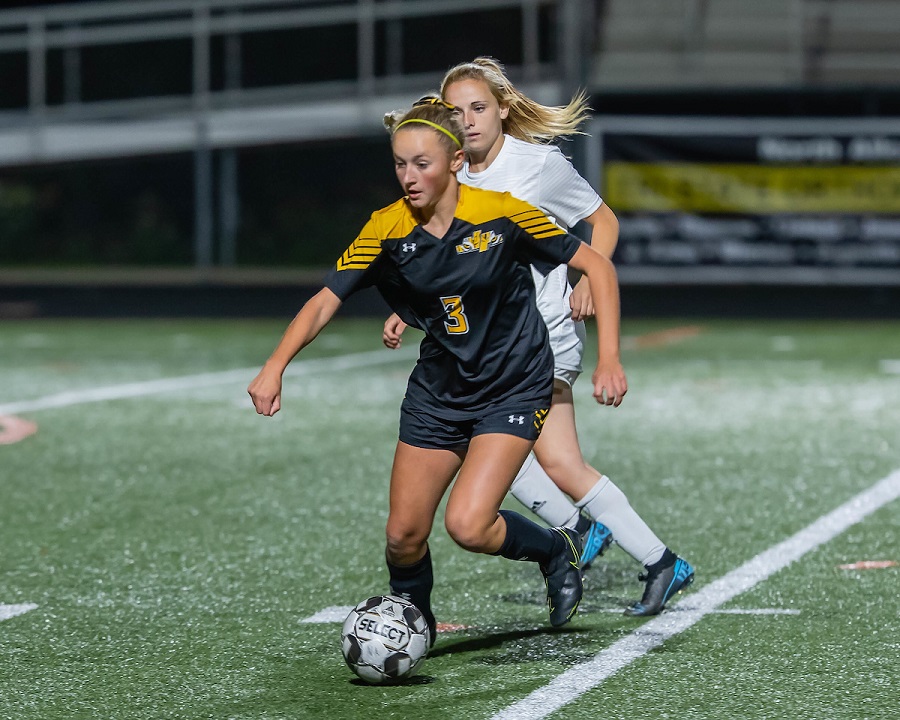 The reigning WPIAL champion North Allegheny girls’ soccer team opened the 2020 Class AAAA playoffs on Monday night at Newman Stadium with a 3-0 victory over the Bethel Park Black Hawks. Following a 19-day layoff, the fifth-seeded Tigers picked up where they left off before the break and advanced to the WPIAL quarterfinals for the fourth straight year. NA will face Norwin on Thursday night in a rematch of last year’s WPIAL championship game.

Appearing in the WPIAL playoffs for the first time since 2014, 12th-seeded Bethel Park used an aggressive and physical style of play to keep play even throughout most of the first half. Despite the Black Hawks spirited effort, senior forward Sarah Schupansky got North Allegheny on the scoreboard first with a strong left-footed shot from 20-yards out that picked the top right corner of the net for a 1-0 lead. The goal, with 6:26 to play in the first half, was Schupansky’s team-leading 16th of the season.

Coming out of halftime, North Allegheny began to dictate the pace of play and tilted the pitch in the Tigers direction. Early in the second half, a flurry of NA shots on net produced another goal. With 33:50 on the clock, Bethel Park goalie Abigail Karstensen made two saves but could not stop a third shot as sophomore Anna Bundy netted her seventh goal of the year to increase the NA lead to 2-0. For her efforts, Bundy was named the Wright Automotive Player of the Game.

Bethel Park was outshot by North Allegheny, 13-4, but the Black Hawks best scoring chance came with 31:30 to play. On a free kick from 30 yards out, Teagan Mehalko drove the ball into the goal box where BP junior Megan Mathias deflected a shot on net but the try was denied on a fine save by keeper Juliana Werner to keep NA’s two-goal lead intact.

With Bethel Park’s best effort thwarted, North Allegheny put the game on ice with 11:12 to play on a goal by sophomore Lucia Wells for a 3-0 advantage. The marker by Wells was her 15th of the season.

The Tigers nearly added one more goal to their tally but a header by Halle Marsalis hit the left post with 8:00 left in the game. The NA reserves closed out the remaining minutes and a 3-0 victory.

With the win, North Allegheny improves to 8-2 overall. Bethel Park’s season ends with a 6-5-2 record. The Tigers advance to face Norwin in the WPIAL quarterfinals on Thursday night. The game will be broadcast live via the internet on the North Allegheny Sports Network.