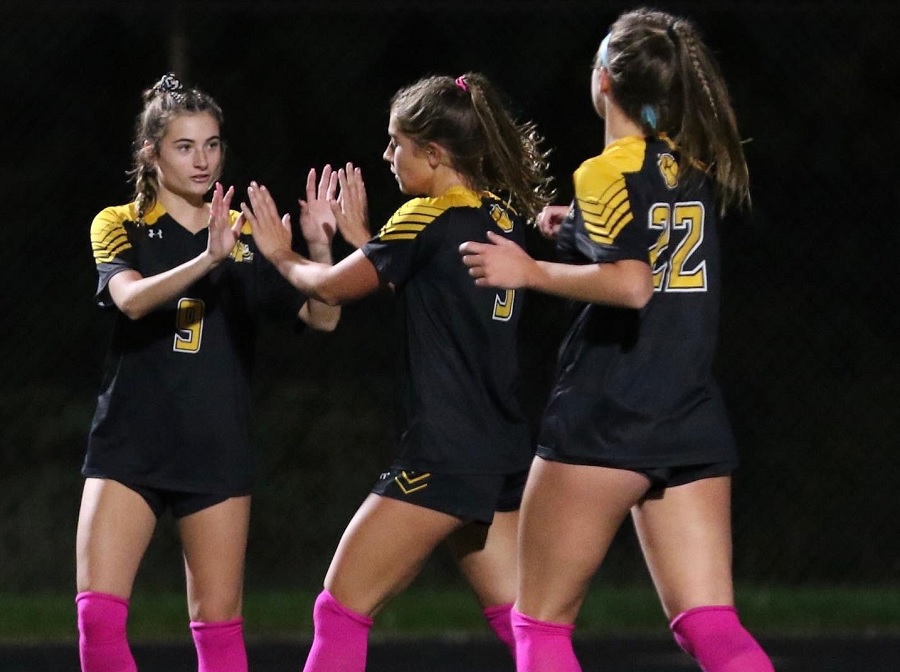 Getting back to the playoffs after last season’s disappointing semifinal loss was one of the stated goals for the North Allegheny girls soccer team. Put a check in the post season column as the Tigers clinched a berth with a 7-0 win over North Hills at Newman Stadium.

Despite a dominating first half, the game remained scoreless for over thirty minutes thanks to the play of the Indians goalkeeper Ava McElhaney.

But the Tigers were able to solve that puzzle late in the first half on a goal by Abigail Stager. Stager maneuvered down the left wing and lifted a shot from just inside the box into the net for her 13th goal of the season in the 35th minute.

It took just four minutes for the Tigers to go up 2-0, as Lucia Wells, who had several great scoring chances, scored from almost the same spot as Stager for her team leading 21st goal.

The onslaught continued, as Wells got her second in the first minute of the second half and Stager added her second in the 46th minute banging home a Wells rebound. Stager now has scored 4 goals in the last 4 matches.

Junior Libby Earley netted her first goal of the year depositing another Wells rebound into the net to give North Allegheny a 5-0 lead in the 51st minute.

Wells completed her 3rd hat trick of the season in the 66th minute for a 6-0 lead. The goal tallies for the Pitt bound senior: 23 on the year, 73 in her career and 10 in the last 4 matches.

Sophomore Kanak Agarwal notched her 2nd goal of the season in the 72nd minute to complete the scoring.

Natalie Rak and Maggie Nestor shared the shoutout, the second consecutive clean sheet and the 7th posted by North Allegheny on the year. The Tigers had 8 corner kicks, and 28 of their unofficial 46 shots on the evening found the frame.

Wright Automotive Player of the Game honors went to Lucia Wells for her hat trick and for creating many other great opportunities for herself and her teammates in the game.

The Tigers have two road section matches against Fox Chapel and Allderdice before returning home for a boys/girls’ soccer doubleheader on Oct. 15 against Seneca Valley.