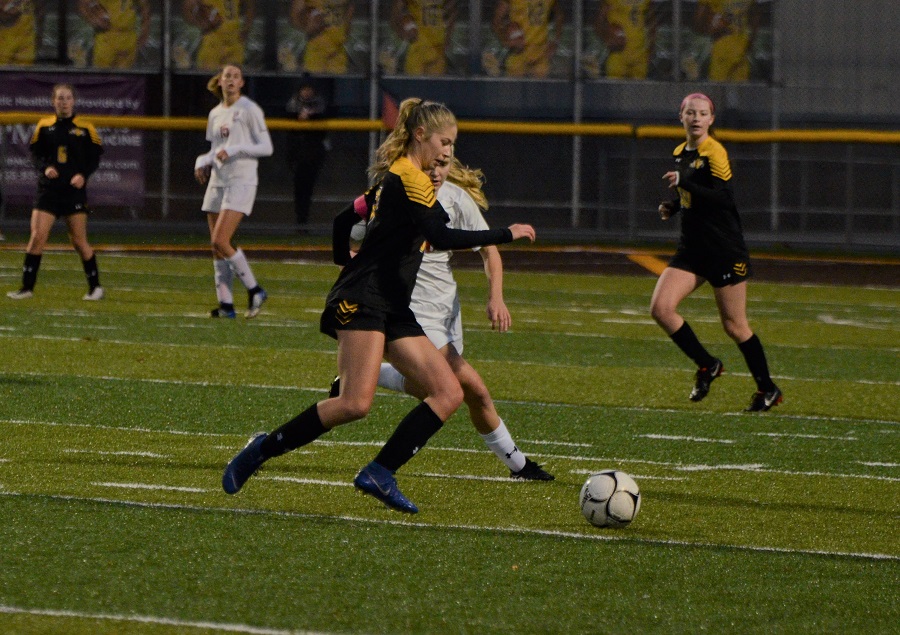 Senior Ava Ruppersberger scored the game’s only goal with 5:01 remaining to help propel North Allegheny to a 1-0 victory over Cumberland Valley in the opening round of the PIAA playoffs on Tuesday night.

The contest at Offutt Field in Greensburg was a matchup between the WPIAL champion Tigers and the District 3 runner-up Eagles. Playing in the state playoffs for the second time in the last three seasons, North Allegheny controlled the pace of play throughout most of the first half. The Tigers generated numerous scoring chances but were turned away on series of defensive gems by Cumberland Valley. The final two chances of the half went to Emma Bundy, who worked her way past CV goalie Abby Miller with 4:30 on the clock but was stopped on a save by defenseman Carly Smith in front of the net. Moments later, a header by Bundy that seemed destined for the twine was stopped on a header by defenseman Ana Stoner to keep the game scoreless at the half.

North Allegheny’s possession time in the CV zone continued in the second half before the Eagles finally started to create some pressure of its own with 20 minutes to play. Senior Gina LuKoskie and junior Shea Collins sparked a 10-minute offensive surge for Cumberland Valley, creating some scoring chances from the left wing. However, North Allegheny’s back line of Alexa Spano and Natalie Mudd prevented the Eagles from cashing in. In particular, Cumberland Valley’s leading scorer, Emily Mashinski, a High Point University recruit, was held in check by the Tigers defense throughout.

After North Allegheny staved off the CV threat, the Tigers settled back into their offensive groove and struck for the game’s only goal. Bundy was able to feed Ruppersberger with a pass to the left and she buried a shot into the Cumberland Valley net to give North Allegheny a 1-0 lead with 5:01 remaining in the contest.

The Ruppersberger marker, her eighth of the season, proved the be enough as the Tigers claimed the one-goal victory and advanced to the PIAA quarterfinals.

With outstanding play in the midfield, and helping facilitate countless possessions into the CV zone, senior Sophia Spano was selected as the Wright Automotive Player of the Game.

Cumberland Valley, who was making its sixth appearance in the PIAA playoffs in the last seven years, has its season come to an end with a 17-3-2 record. North Allegheny improves to 18-2-1 with the win. The Tigers will face Boyertown in the PIAA quarterfinals on Saturday. Boyertown, the District 1 runner-up, defeated Nazareth on Tuesday night, 2-1.