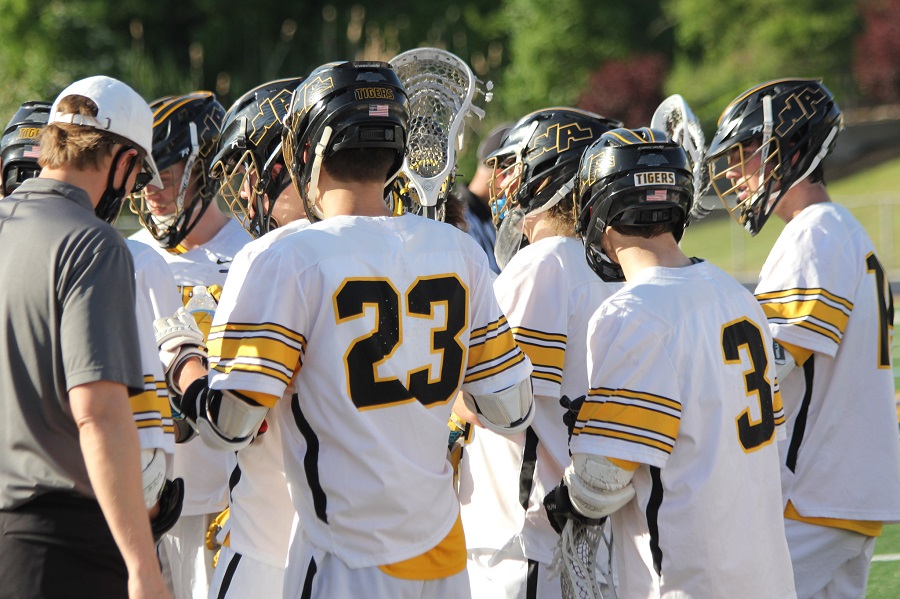 It took North Allegheny a while to find their legs at Moon High School, but once the Tigers got untracked, they rolled to a 15-2 PIAA 1st Round win against the McDowell Trojans.

Both teams were slogging through a scoreless first quarter even though North Allegheny was dominating possession. About 8:30 minutes through the opening stanza, coach John Rullan called a timeout. After the stoppage, the Tigers found their footing and found the back of the net when freshman Evan Lyon continued his torrid playoff stretch with his 11th goal of the year at (9:00) even. Nine of Lyon’s goals have come in the playoffs.

Nick Eck then notched his 26th goal of the season 1:47 later and :49 after that marker, Jonah Hawrylak picked up his first of the night and North Allegheny led 3-0 after the first quarter.

It did not take NA quite as long to find it’s rhythm in the second quarter as junior Ryan Barry won the faceoff and raced up field for a goal to make it 4-0 seven seconds into the quarter. Barry’s tally was his 6th of the year, and the FOGO specialist also went 21-for-21 at the X in the match. Leading goal scorer Cole Bordo scored his first of two second quarter goals, Marc Bartolomucci added his first of two on the night, with Hawrylak and Andrew Myers tallying around McDowell’s first goal of the match by Jacob Emery to make the halftime score 9-1.

Ben Rohan scored two second half goals as did sophomore Mason Kress. The final score of the night completed the hat trick for Hawrylak, who now has 16 goals on the season. The three goals were enough to gain the Wright Automotive Player of the Match honors for the senior attacker.

All told, eight Tigers had multiple point nights, led by Eck’s goal and 5 assists and the Hawrylak hat trick. Bartolomucci had two goals and two assists. Bordo (2/1), Myers (1/2), and Lyon added an assist with his goal as did Kress. Ian Mitchell also found the scoresheet with an assist for the Tigers. Backup goalies Marc Melanson and Beck Taucher got some playing time between the pipes in relief of starting senior Aiden Miller.

The Tigers (13-4) head to the quarterfinal round of the state playoffs where they will face Conestoga. The sixth seeded Pioneers from District 1, upset the district’s top seed Springfield-Delco 9-3 to advance in the tournament. The match will be held Saturday at a site and time to be determined.