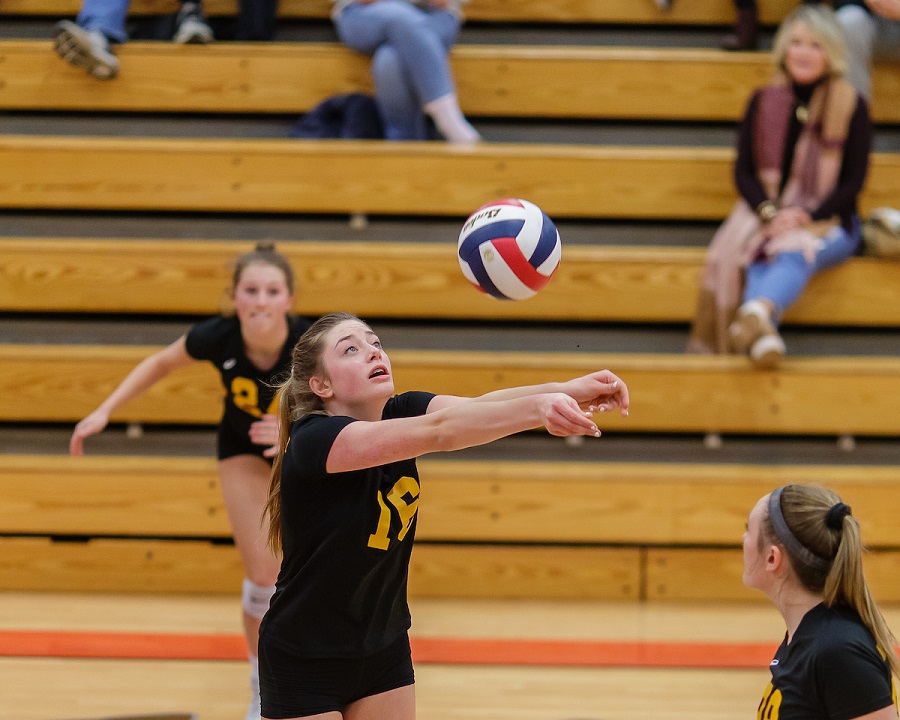 In a first-place showdown between North Allegheny and Pine-Richland on Tuesday night, the top-ranked Tigers defeated the second-ranked Rams by a 3-1 decision in a Section 1-AAAA contest. Pine-Richland won the first set, 25-16, but NA won the next three sets by scores of 25-18, 25-6 and 25-21. The victory is North Allegheny’s 56th in a row and 14th straight against Pine-Richland.

The last time Pine-Richland had defeated North Allegheny, first-year head coach Hannah (Muzzonigro) Ayhan was a player for the Rams back in 2011. Ayhan’s Rams stormed out of the gates in the first set, powered by the big swings of freshman Kali Doctor, who peppered the Tigers with six kills. Pine-Richland was also boosted by its play at the net thanks to the efforts of Slippery Rock commits and twin sisters Maryellen and Jiley Berger. Leading 7-6, Pine-Richland pulled away for a 25-16 win in the opening set.

Pine-Richland grabbed a 5-1 lead in set two, but North Allegheny finally began to settle into the contest. Junior Paige Morningstar led the Tigers back with four kills and senior Elianna Seamon posted two aces down the stretch the help NA rally for a 25-18 win in the second set.  A constant source of energy for the Tigers throughout the night, Morningstar finished with a team-high 10 kills and team-best 15 digs, earning Wright Automotive Player of the Game honors.

Gaining momentum following the set two win, the Tigers battered the Rams in the third set for a 25-6 rout. While the Rams dominated the net in the first, North Allegheny took control of middle from the second set on. After Doctor posted six kills in the first set, she was limited to six kills for the rest of the contest. The Tigers used a variety of players to clog the middle, including seniors Madison Curran, Hannah Phillips and Abby Miller, as well as junior Madison Beer and sophomore Rachel Burton.

In the fourth set, North Allegheny jumped out to a 10-3 lead with some timely kills from Curran, who totaled eight on the evening. Curran was named the Quad-A Player of the Week by the PVCA earlier in the week. Pine-Richland trimmed the NA lead to one point at 21-20 late in the set, but the Tigers rattled off four of the next five points to claim a 25-21 win. Junior Paige Miller tallied the match-ending point with a big swing and totaled eight for the contest.

North Allegheny improves to 9-0 overall and 6-0 in Section 1-AAAA. Pine-Richland drops its first section contest, falling to 5-1. The Tigers visit Shaler on Thursday night in another section contest.