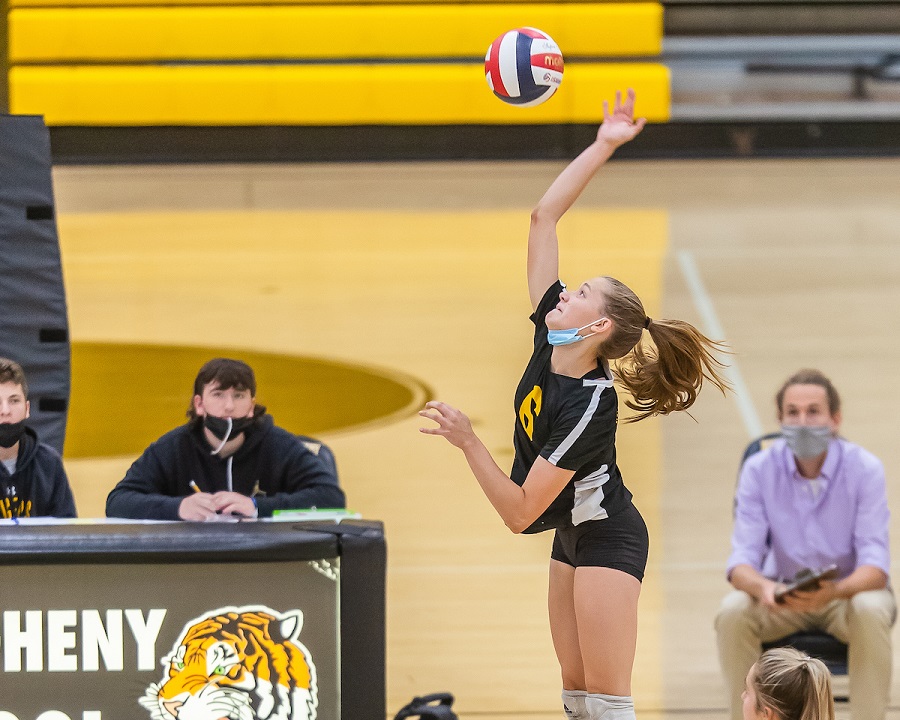 In a battle between the top-ranked teams in Class 4A and Class 2A, the North Allegheny Tigers swept the Freeport Yellow Jackets on Monday night, 3-0, in the 2022 season opener. The Tigers, the five-time reigning PIAA champions in the largest classification, earned the win by set scores of 25-13, 25-14 and 25-10.

Freeport, who won the WPIAL Class 3A title last year, dropped down to Class 2A this season. In the opening set, the two champions battled to a 9-9 tie in the early going. That’s when NA rattled off a 6-0 run and seized the momentum. Senior Carissa Treser helped spark the run with five of her six kills coming in the opening set. Fellow senior Mia Tuman served up a pair of aces and added a block to solidify a 25-13 win.

The Tigers jumped out to a 6-1 lead in set two and controlled the action thanks to the powerful swings of senior Ella Deeter and junior Rylee Gadomski. Deeter delivered five of her team-high 12 kills in the set and added a pair of aces. Gadomski tallied five kills and spearheaded NA’s strong start in the set. After missing all of last season with a knee injury, Gadomski made a triumphant return to action and was named the Wright Automotive Player of the Match. NA took the second set by a 25-14 decision.

The third set was all North Allegheny. The Tigers again raced out to a quick lead and cruised to a 25-10 victory. The final two points of the night came courtesy of a Julie Butler kill and a Caileigh Duffy ace. Duffy totaled two aces on the evening, and overall, North Allegheny collectively tallied eight aces.

With the season-opening win, North Allegheny will take on another traditionally strong program, the Norwin Knights, on Wednesday at 7:00 p.m. The match will be broadcast live via the internet on the North Allegheny Sports Network.