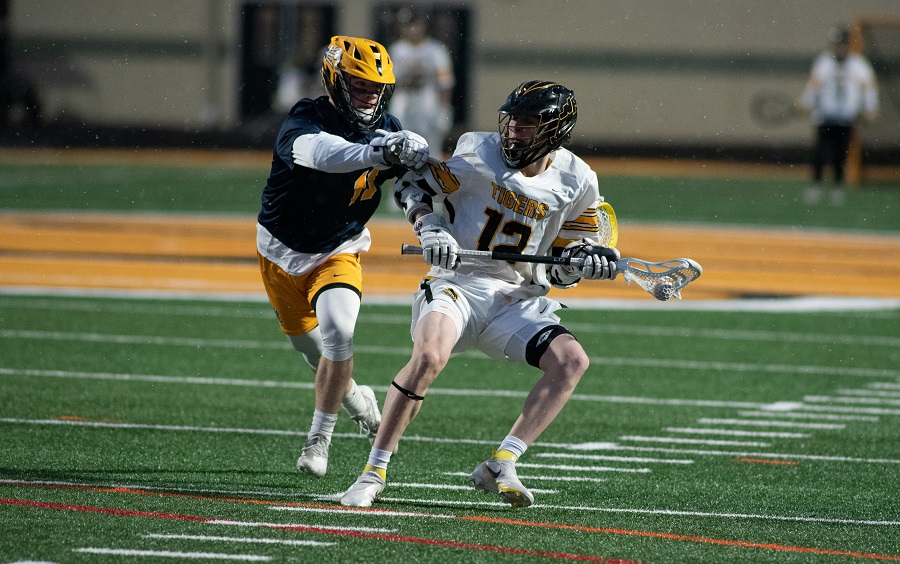 The North Allegheny boys’ lacrosse team dropped a heartbreaker on Friday night with a 9-8 defeat to Mt. Lebanon in non-section game at Newman Stadium. In a matchup between two teams ranked in the top five in Class AAA, the second-ranked Blue Devils rallied from a 6-2 halftime deficit and scored the game-winning goal on a marker by John Porretta with 1:06 remaining in the game.

Third-ranked North Allegheny stormed out of the gates in the first half and scored just six seconds into the game when senior Ryan Barry won the opening faceoff and scored for a prompt 1-0 lead. The Tigers made it 2-0 when junior Christian Tedder found the back of the net with 5:52 remaining in the opening stanza.

Mt. Lebanon’s Jack McCann scored on a fastbreak with 5:09 left in the first and struck again 29 seconds into the second period to even the score at 2-2. North Allegheny dominated possession time in the first half and rattled off four straight goals to end the second quarter. Markers by sophomore Evan Lyon, senior Gavin Banyas, junior Marco Pascarella and senior Cole Bordo gave North Allegheny a 6-2 lead at intermission. In addition to his first period goal, Tedder assisted on the Bordo tally and was named the Wright Automotive Player of the Game.

In the second half, Mt. Lebanon flipped the script in terms of possession time, thanks in part to the faceoff work of Mark Adametz. The Chatham University commit won the opening draw of the second half to set up Aidan Conway for a goal 59 seconds into the third quarter, trimming the NA lead to 6-3. North Allegheny junior Marc Bartolomucci immediately answered back with a goal less than a minute later for a 7-3 advantage. However, the Blue Devils received goals from Thomas Lee and McCann, his third of the night, to cut the score to 7-5 at the end of three quarters.

Riding the wave of momentum, Mt. Lebanon’s Gus Cramer tallied a marker 1:03 into the fourth quarter to bring the Blue Devils to within one goal, 7-6. With the Blue Devils threatening to tie the game, junior goalie Beck Taucher made a pair of huge saves midway through the fourth quarter to keep North Allegheny’s one-goal lead intact. The Tigers received an offense lift moments later when Lyon scored his second of the game with 5:59 remaining for an 8-6 lead.

It appeared North Allegheny might stretch the lead out even more with two late game man-up opportunities. Instead, Mt. Lebanon’s man-down defense not only stopped NA but managed to tie the game. With 4:33 to play, Mt. Lebanon’s Charlie Pellegrino scooped a groundball, and just as the man-up expired, went coast-to-coast for a goal and the NA lead was trimmed to 8-7. In similar fashion just over a minute later, senior Alex Tecza scored a coast-to-coast man-down goal with 3:14 remaining to tie the game at 8-8. The Blue Devils trailed the vast majority game but took their first lead of the night on the Porretta tally with 1:06 to play.

North Allegheny had one last gasp in the waning seconds but Lyon was turned away on the doorstep on an outstanding save by Mt. Lebanon goalie Sam Myers and the Blue Devils prevailed, 9-8. Taucher also played well in net for the Tigers and made six saves on the night.

Following the outcome, North Allegheny falls to 1-1 overall, while Mt. Lebanon improves to 2-1. The Tigers look to bounce back on Saturday at 3:30 p.m. at Manheim Township.