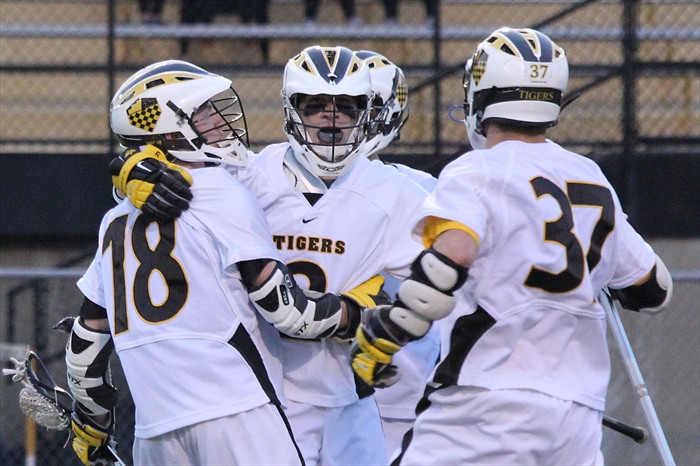 In recent meetings between North Allegheny and Sewickley Academy, typically a fantastic finish is in store. Earlier this season, NA rallied for an 8-7 victory in double overtime over Sewickley.  In their last playoff encounter in the 2011 WPIAL semifinals, the Panthers outlasted the Tigers for a 13-12 win.  On Wednesday night at Newman Stadium, no nail biting was necessary as North Allegheny handled Sewickley Academy for a 9-5 victory in the WPIAL Division 1 Quarterfinals.

The Tigers raced to a 3-0 lead in the first quarter on goals by Nick Koebley, Alec McGovern and Zech Nachazel. Less than two minutes into the second quarter, Nachazel struck again to make it 4-0, Tigers.

Despite falling behind early, Sewickley Academy maintained their methodical offensive approach and eventually touched the scoreboard at the midway point of the second quarter on a tally by Keegan MacDougall. With 3:40 remaining in the second period, Adam Weir stunned the Tigers with a man-down goal to cut the NA lead to 4-2.

Junior Kyle Rullan answered immediately for the Tigers just 31 seconds later to make it 5-2, North Allegheny.  Sewickley managed to pull back to within two goals of the Tigers with 1:02 to go before halftime on a man-up tally by Michael Foley.

North Allegheny began the second half as they did the first, with a flurry of goals to open up an 8-3 lead.  Rullan, Koebley and Stephen Kelleher expanded the Tigers advantage to five goals.  With two goals and two assists, Koebley was named the Wright Automotive Player of the Game.

Unfortunately for the Tigers, a mountain of penalties began to catch up to them and Sewickley Academy started to cash in.  Having already scored one man-up goal in the first, SA added two more in the fourth quarter to bring the score to 8-5. Both fourth period goals for the Panthers were netted by MacDougall who finished with a hat trick. However, MacDougall’s markers came too little, too late, and the Tigers capped the scoring with an Alec McGovern goal with 4:52 to play to bring the score to its eventual final, 9-5, Tigers.

North Allegheny improves to 13-6 overall and will face Mt. Lebanon on Monday night in a rematch of last year’s WPIAL championship game. The site and time of the semifinal game against Mt. Lebanon has yet to be determined at the time of this article. Sewickley Academy finishes up the season with an overall mark of 9-8. For a look at the WPIAL Division Boys Lacrosse bracket, click here.