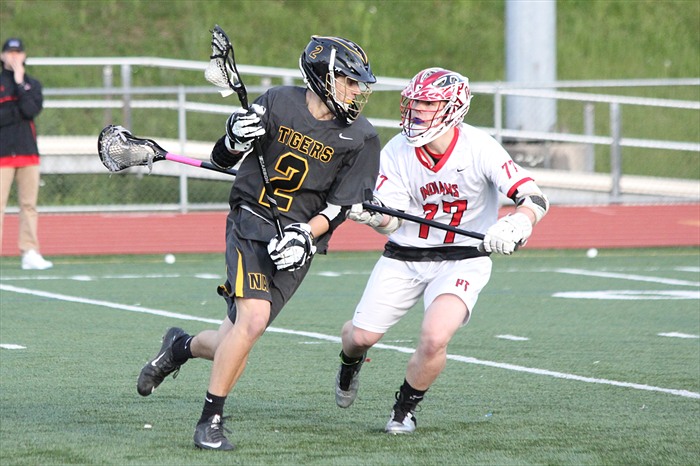 Manheim Township used last second goals in the fourth period and overtime to edge the North Allegheny boys’ lacrosse team in the opening round of the PIAA playoffs, 10-9. With Tigers leading 9-8 in the waning seconds of the fourth quarter it appeared that the WPIAL champions were poised for a win in the state tournament. However, the Blue Streaks scored with two seconds remaining to force overtime and tallied the game winner with just 12 seconds left in the extra session to hand North Allegheny a heartbreaking defeat.

The Blue Streaks had control of the game in the first half and held a 6-3 lead at halftime despite goals from NA’s Wes Powell, Matt Osten and Gavin Hagen. In the third quarter, the North Allegheny offense erupted for five straight goals and an 8-6 lead. Powell scored two goals in third period on his way to a four-goal performance. Hagen, Osten and Dillon Dugan also tallied markers in the third-period outburst.

Manheim Township scored late in the third period to cut the NA lead to 8-7 and tied the game at 8-8 with a goal with 3:08 left in regulation. Powell netted his fourth goal with just 50 seconds remaining to put NA back on top, 9-8. Manheim Township managed to avert defeat by scoring the equalizer with two seconds to play and won the game on a Tre Blomeier goal in overtime.

North Allegheny concludes the season as the WPIAL champions and an overall record of 13-9. Congratulations to coach John Rullan and the Tigers for an outstanding and historic 2016 season for the North Allegheny boys lacrosse program.