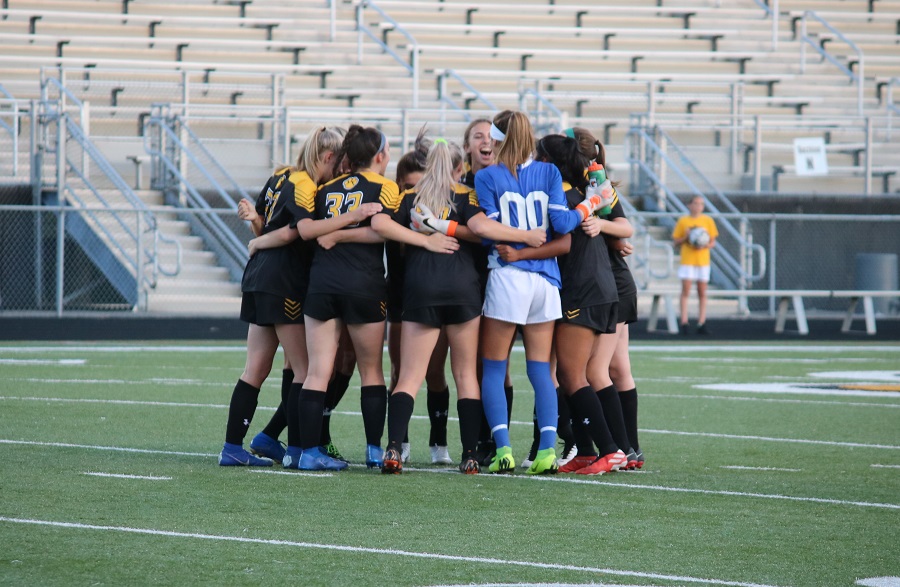 For the second straight game, freshman Lucia Wells scored the game-winning goal to lift North Allegheny to a 3-2 win over Pine-Richland on Wednesday night in the Section 1-AAAA opener. Wells broke a 2-2 tie with a well-timed steal and goal in the game’s 54th minute. For her efforts, Wells was named the Wright Automotive Player of the Game.

In a battle of two top-five teams in Class AAAA, it was Pine-Richland who struck first when freshman Ava Boyd tallied the game’s first marker in the 3rd minute for a 1-0 lead.

The Rams had two golden opportunities to add on to their lead in the few minutes that followed but were denied on a pair of outstanding defensive plays. In the 6th minute of the contest, Ava Boyd stole the ball and sent a long pass ahead to Pine-Richland junior All-American Megan Donnelly. However, senior NA defenseman Natalie Mudd toed the ball away to prevent Donnelly from getting a clean shot on net and the score remained 1-0. Moments later, it was Donnelly with another great scoring chance but a diving save by NA goalie Madison Vukas stonewalled the Rams yet again. Vukas totaled four saves on the evening.

North Allegheny capitalized on its first scoring chance of the night when a penalty on Pine-Richland resulted in a penalty kick in the game’s 11th minute. Senior Emma Bundy cashed in with a shot in the bottom left corner of the net to tie the game at 1-1.

Less than three minutes later, junior Sarah Schupansky charged into the right corner and sent a shot on net that was deflected by PR keeper Katherine Kelly. Bundy corralled the rebound and found a wide-open Hannah Kirkpatrick who buried a shot from 10 yards out to give North Allegheny a 2-1 lead.

The Tigers seemed to control the pace of play well into the second half before a free kick changed the momentum. From 33 yards out, Donnelly sent the free kick deep into the Tigers zone and senior Izzy Boyd scored on a header to even the score at 2-2 in the 49th minute.

A few minutes later, Izzy Boyd and the Rams threatened again but Vukas made another diving stop to keep the score tied. As was the case in the first half, a terrific defensive play spurred on the offense. In the 54th minute Wells came through for a steal and a goal from 10 yards out to give North Allegheny the lead for good, 3-2.

With the win, North Allegheny improves to 2-0 on the season and 1-0 in Section 1-AAAA. Pine-Richland falls to 1-1 overall and 0-1 in section play. The Tigers return to action on Friday night with a section contest at Shaler at 6:00 p.m.