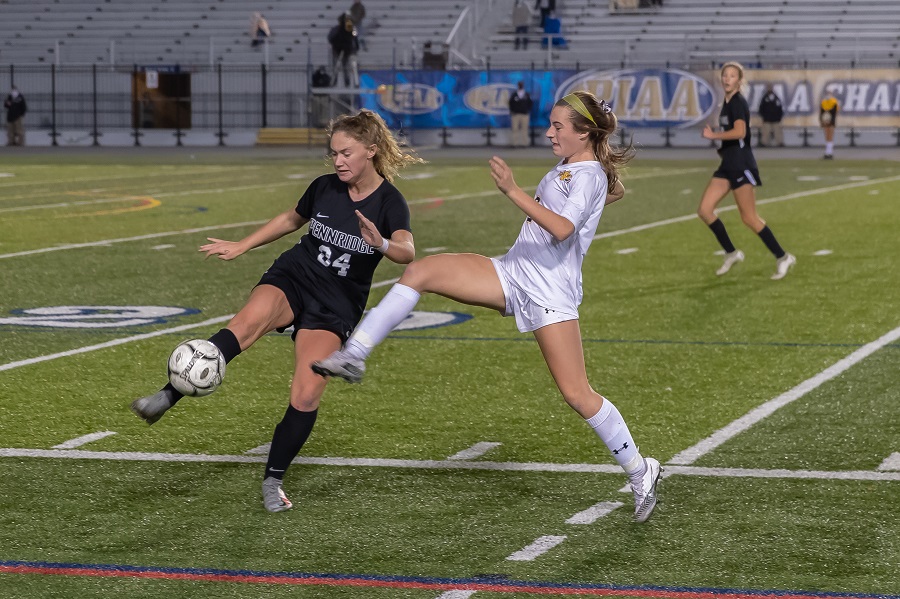 NA Falls in 1-0 in State Championship

With it being North Allegheny’s first time in the state championship and Pennridge starting six freshman, there was a feeling out process throughout the first 20 minutes of the first half with both teams playing conservatively and neither team looking to make the first mistake. From the 20 minute point on, Pennridge was much more aggressive. The best opportunity of the first half came with 13 minutes to go when High Point recruit Leah Malone beat the North Allegheny defense and tried to go top shelf on keeper Megan Miller. Malone beat Miller but hit the crossbar and the score stayed at 0-0. Pennridge kept the pressure on the Tigers and had another great chance with 10:40 to go in the half but Alexa Spano sacrificed her body and blocked the shot to keep the game scoreless. With 5:10 remaining in the half North Allegheny started to find their rhythm offensively and Sarah Schupansky was fouled from about 40 yards out. Schupansky put the free kick shot on net and it looked like Pennridge keeper Sierra Shaeffer misplayed it but was able to recover at the last second and keep the ball out of the net. The final opportunity of the first half was with the Tigers when Samantha Braden was able to create a little space on the left side and put in a perfect cross to Bri Torchia who put a strong header on the pass but the ball went just high and at the half the score was still 0-0.

For how eventful the first half was, in the second half both teams were even more aggressive. North Allegheny controlled the pace of play throughout the first 10 minutes but the momentum swayed into Pennridge’s favor and with 28 minutes left in the game, Pennridge had two point blank opportunities back to back, both of which were stopped by spectacular Miller saves. The field evened out for the rest of the half with neither team getting any more scoring chances and we were headed to overtime with the game still scoreless.

The first overtime was very similar to how the game started with both offenses using a conservative approach. The teams played most of the period in between the 30 yard lines and we were headed to a second overtime. In the second overtime Malone got her revenge, after hitting the cross bar in the first half she took another shot in the top right corner, this time going in and Pennridge became the PIAA 4A Champions with a 1-0 win.

Kena Shannon was named the Wright Automotive Player of the Game for her phenomenal defensive effort. Malone had created havoc all throughout the first half and Shannon was matched up with Malone most of the second half and held her to no scoring chances. Malone was then switched to the other side of the field by the Pennridge coaching staff for overtime.

North Allegheny finishes the season with a 13-3 record. After a wild season where there was uncertainty if it would even start, the Lady Tigers were able to repeat as WPIAL Champions and go farther in the PIAA playoffs than any other girls’ soccer team in North Allegheny history. Congratulations to coach Chuck Kelley and the entire team for a memorable and historic season.