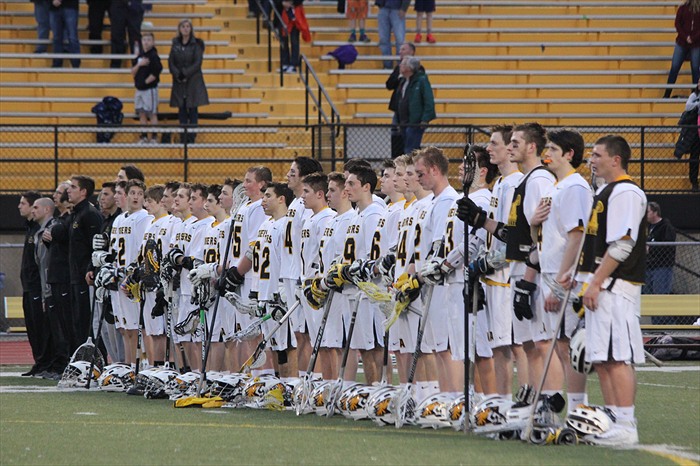 North Allegheny boys’ lacrosse picked up its second section win in a row with an 8-5 victory at Fox Chapel on Wednesday night. The Tigers broke open a 5-5 game with three unanswered goals in the fourth period to claim the victory. For Fox Chapel, it was its first loss of the season.

Junior Gavin Hagen led the offense with four goals, including two in the third period. The Tigers trailed 3-2 at halftime but Hagen’s two goals in the third, and another marker by Trevor Saundry, helped NA take a 5-3 lead early in the third quarter.

Fox Chapel battled back to tie the game at 5-5 before the end of the third period but Ben Maenza, Dillon Dugan and Hagen closed out the scoring in the fourth quarter with the final three goals of the contest to give North Allegheny an 8-5 triumph.

Filling in for an injured Alec Vissotski, sophomore Jono Pelusi dominated the faceoff circle with 13 of 16 draws in the first half. Pelusi and Jack Kairys picked up six ground balls apiece to keep NA in possession throughout much of the night. Contributing to the offensive showing was Wes Powell who tallied one goal and two assists.

Following the win, North Allegheny sits at 2-1 overall and 2-0 in section play. Fox Chapel dips to 3-1 overall and 1-1 in section action. The Tigers will visit St. Ignatius in Ohio on Friday at 7:00 pm.