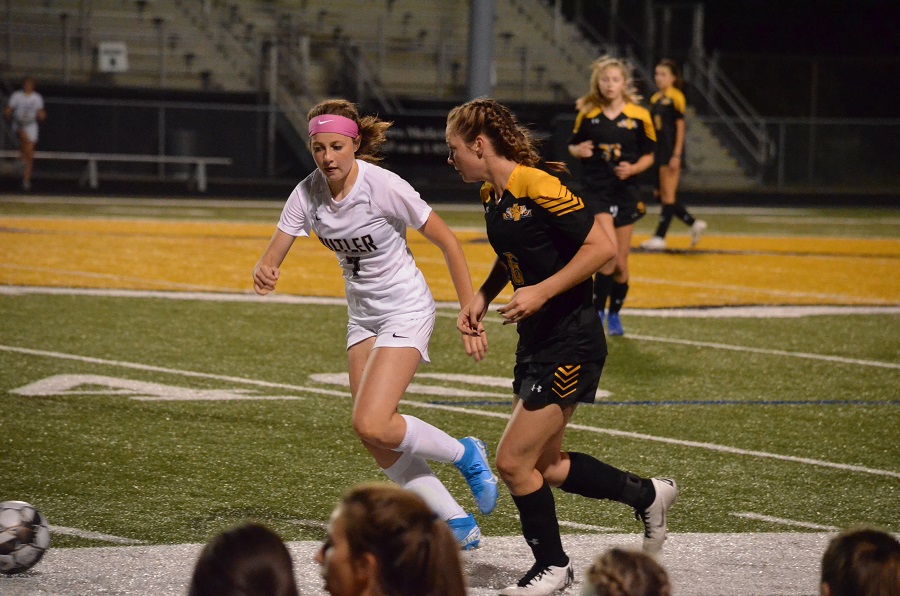 NA Holds on to Beat Butler 2-1

The Lady Tigers exploded out of the halftime break and then hung on late to defeat Butler 2-1 at Newman Stadium on Wednesday evening.

North Allegheny had a very strong start to the game pressuring Butler any chance they had. The first scoring chance came when Sarah Schupansky took a shot from 20 yards out and clanked it off of the crossbar. After this, play was pretty even the remainder of the half and the first half ended, 0-0.

The Lady Tigers stormed out of the gate to start the second half. The first goal of the game came from Hannah Kirkpatrick’s header off a beautiful cross from senior Ava Ruppersberger to give North Allegheny a 1-0 lead. A few minutes later Schupansky got on the board when she was able to streak past the Butler defense, beat keeper McKenna Yaracs and walk the ball into the net, giving the Lady Tigers a 2-0 lead. The second NA goal was also assisted by Ruppersberger.

Butler then started to put the pressure on the Tigers getting scoring chance after scoring chance. NA keeper Madison Vukas made several big saves to keep the North Allegheny lead at two. However, late in the second half Butler finally broke through when a Gabrielle Boden shot hit the post and Chloe Weiland was able to clean up the rebound making the game 2-1, Tigers. The North Allegheny defense stood tall the remainder of the game and the Lady Tigers hung on for the 2-1 victory.

The win for North Allegheny was its fourth in a row and improved its record to 7-1 overall, 5-0 in section play. Butler falls to 5-3 overall and 2-3 in the section. The Lady Tigers will be back in action on Saturday in Ohio when they take on Howland High School at noon.