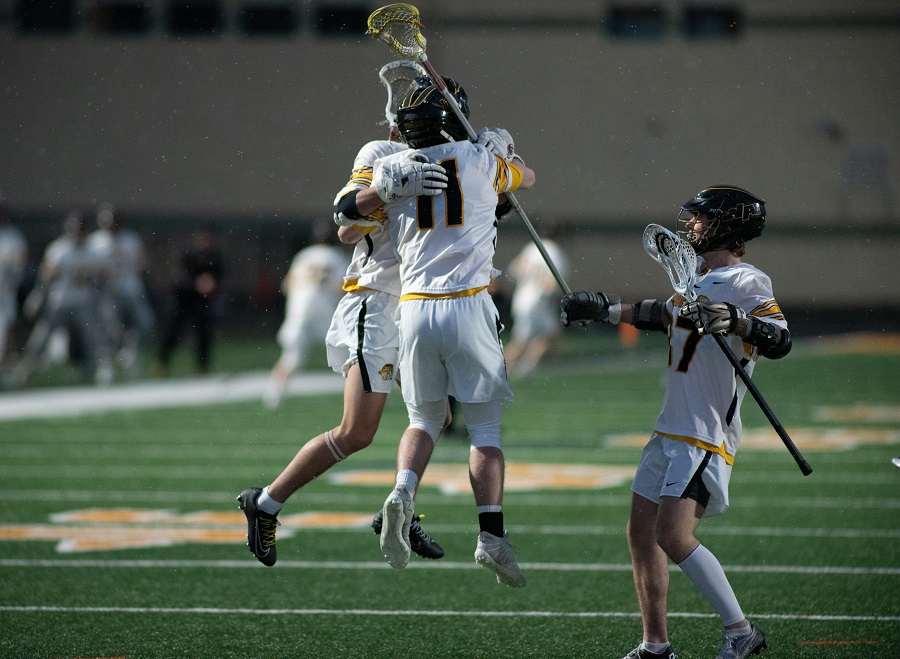 In a battle between the two top teams in Section 2-AAA, the North Allegheny boys’ lacrosse team gained sole possession of first place on Wednesday night with an 8-7 win at Shady Side Academy. The contest was also a rematch of last year’s WPIAL championship game, with the reigning champion Tigers again prevailing with a one-goal victory.

Goals by Marco Pascarella and Christian Tedder helped NA grab a quick 2-1 lead after one quarter of play. Tied 2-2 early in the second quarter, North Allegheny scored four of the next five foals to take a 6-3 lead into the locker room at halftime. Sophomore Evan Lyon, senior Cole Bordo, senior Gavin Banyas and junior Marc Bartolomucci all scored second period goals to help NA sprint to a three-goal lead.

After a scoreless third quarter, the Tigers extended their lead to 7-3 thanks to Banyas’ second marker of the evening 16 seconds into the fourth quarter. However, the Bulldogs staged a rally as Ethan Salvia netted back-to-back goals and James Rost added another to trim the NA lead to 7-6 with 5:51 remaining in the game. Salvia, who was the 2021 WPCLA Class AAA Player of the Year, finished with three goals on the night.

Despite fourth-period surge by the Bulldogs, North Allegheny thwarted the Shady Side rally and increased the lead to 8-6 on Bordo’s second goal of the night with 4:09 left to play. The two-goal remained intact until SSA’s J.P. Henry tallied a marker with just 47 seconds remaining. The Tigers grinded out the waning seconds and held on for the 8-7 victory.

The North Allegheny ride frustrated Shady Side Academy throughout the night and forced a bevy of turnovers. Banyas and Bordo each posted two groundballs apiece on the ride, while senior Owen Bishop and freshman Travis Lamark each tallied three caused turnovers. Pascarella totaled a team-high five groundballs, followed by Banyas with four groundballs. In net, senior Marc Melanson had a big night with 10 saves to earn the victory.