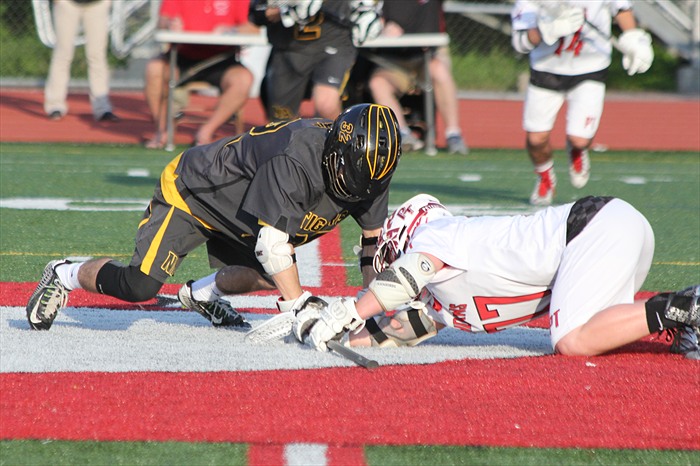 The North Allegheny Tigers spotted Peters Township an early 2-0 lead but fought back and defeated the Indians, 5-4, in the WPIAL quarterfinals on Thursday night. The Tigers got off to a rough start trailing after the first period but changed their strategy offensively in the second period. Garret Hagen scored with 8:28 left  in the half to cut the deficit to 2-1 at intermission.

The Tigers took the momentum into the locker room and came out on fire in the third period scoring two goals in eight seconds from Wes Powell and Trevor Saundry three minutes into the quarter. That lead held until Bennet Faloni tied it to send the game to the fourth period, 3-3.  Again the Tigers struck quickly, this time two goals in 43 seconds from Powell and Hagen to take a 5-3 lead with seven minutes left.

Peters Township made things interesting by scoring with two minutes left on a goal from Jack Delaney. The Indians had a man-up situation in the last minute but could not get a quality shot off and the Tigers were victorious.

The Wright Automotive player of the game was Alec Vissotski. He won 12 out of 13 faceoffs on the night to give the Tigers possession and control. Vissotski and the NA defense were key in controlling possession and limiting the Peters Township attack in a low-scoring affair. Jack Kairys, Greg Ferringer, Antonio O’Barto and Doug Wild played significant roles on the defensive side of the ball.

With the win, the Tigers improve to 11-8 overall and will move on to the semifinals on Monday night to face Shady Side Academy. The game will be broadcast live via the internet on the North Allegheny Sports Network.