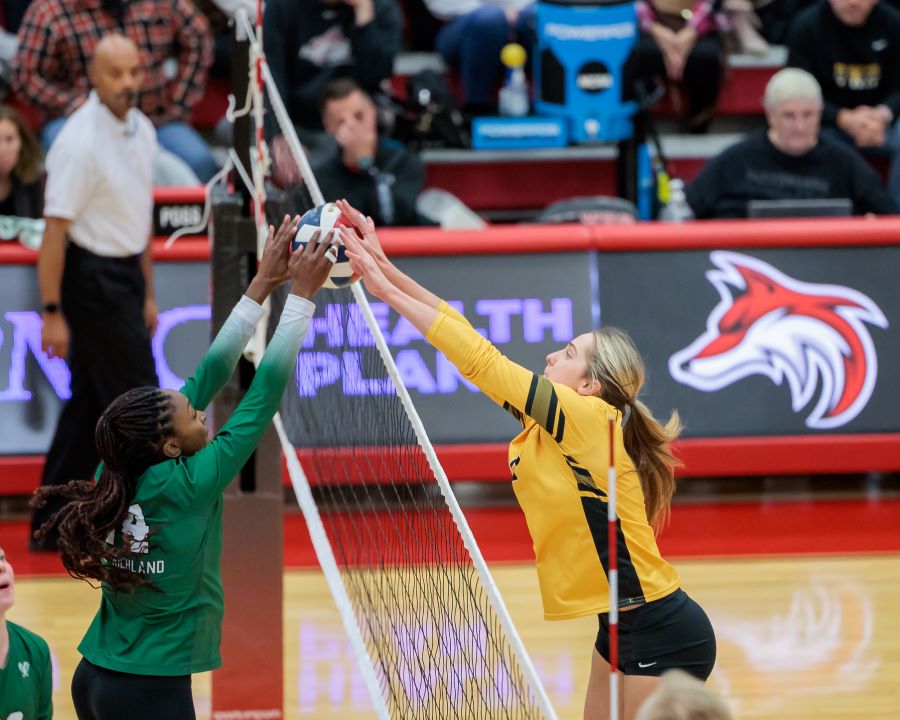 The North Allegheny girls’ volleyball team advanced to the PIAA Class 4A championship for the sixth consecutive season with a 3-1 victory over Pine-Richland in the state semifinals on Tuesday night at Fox Chapel High School. The Tigers atoned for their only loss of the season by set scores of 24-26, 25-19, 25-14 and 25-12.

Seeking revenge for a WPIAL championship loss to Pine-Richland in five sets on Nov. 5, the Tigers were eager for their fourth meeting of the season with the rival Rams. North Allegheny stormed out of the gates in set one and grabbed an 8-2 lead. Seniors Carissa Treser and Ella Zimmer spearheaded the effort in set one with four and three kills, respectively. Late in the set, the Tigers led 24-22 but the Rams rallied with four consecutive points to steal away the game, 26-24. Pine-Richland was buoyed by senior Kaili Doctor, a North Carolina A&T recruit, with six kills in the set and finished with an unofficial 16 kills on the night.

In set two, the Tigers flipped the script on the Rams as it was NA who fell behind by six points but staged a triumphant comeback. North Allegheny trailed 10-4 before chipping away at the deficit. Treser hammered out eight kills in the second set to spark a 25-19 win.

While the first two sets were tightly contested, North Allegheny and senior Mia Tuman completely dominated the rest of the night. Tuman took over the match in all phases and led the Tigers to a 25-14 and 25-12 win in sets three and four, respectively. The Ohio State University commit tallied 12 kills and dished out a team-high 41 assists. Additionally, Tuman totaled a team-best five blocks, while posting 13 digs and an ace. For her exceptional play, Tuman was named the Wright Automotive Player of the Match. She also tallied the final two points of the night with a kill and block to punch NA’s ticket to the PIAA finals.

Match-clinching point to head back to the State Title!! pic.twitter.com/AQz8ELgmQq

With the win, North Allegheny improves to 21-1 overall and Pine-Richland’s season ends with an 18-3 mark. The Tigers will face Garnet Valley in the PIAA Class 4A championship on Saturday at 6:00 p.m. at Cumberland Valley High School. The match will be broadcast live by the North Allegheny Sports Network.