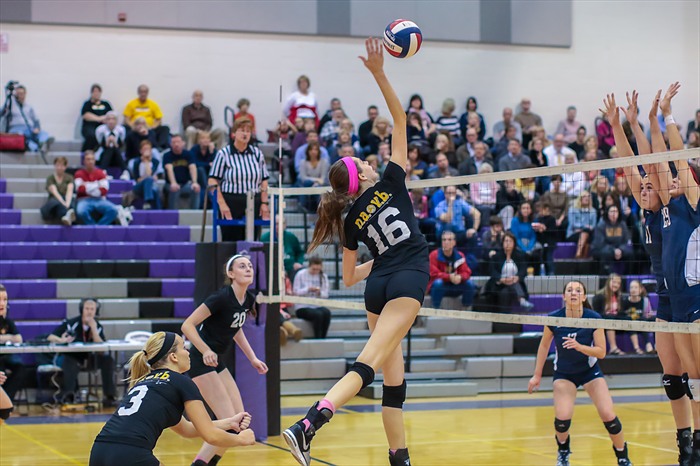 Eighth-seeded North Allegheny will appear in the Class AAA WPIAL title match for the second consecutive season as the Tigers swept the fourth-seeded Mt. Lebanon Blue Devils, 3-0, at Baldwin High School on Thursday night. Atoning for an earlier loss to Mt. Lebanon on September 8, the reigning champions claimed this WPIAL semifinal matchup by set scores of 25-23, 25-18, and 25-22.

The opening set was a test of wills that was nip and tuck throughout. The Tigers held a narrow 23-22 lead but outlasted the Blue Devils thanks in large part to University of Notre Dame recruit Meg Morningstar. The NA senior collected five kills and three blocks in the set, including game point to give the Tigers a 25-23 in game one.  Mt. Lebanon, just two years removed from a WPIAL title of its own, hung tough with the Tigers courtesy of sophomore Katherine Peters and senior Alexa Pavlik.  Peters collected five kills in set one, while Pavlik notched four kills and a block.

In set two, the Tigers jumped out to an 18-10 lead and kept the Blue Devils at arm’s length to hold on for a 25-18 win. The third set was much closer, but Morningstar jammed the middle with five blocks and two kills to finish off Mt. Lebanon, 25-22. For her efforts, Morningstar was named the Wright Automotive Player of the Match.

Along with Morningstar, the Tigers received outstanding contributions from Lauren Swartz (6 kills and 3 blocks), Annika Chang (5 kills and an ace) and Tayler Ricketts (3 kills and 2 aces). Freshman setter Piper Morningstar did a terrific job of distributing the ball to her teammates for big swings.

For Mt. Lebanon, Peters collected eight kills and Pavlik provided 11 kills and five blocks in the middle. Senior Mary Baich was also solid with six kills and three blocks. (All totals are unofficial).

North Allegheny improves to 13-6 overall and advances to the Class AAA title match against the second-seeded Baldwin Highlanders on Saturday night. Start time is slated for 6:00 pm at Baldwin High School. The match will be broadcast live via the internet on the North Allegheny Sports Network.