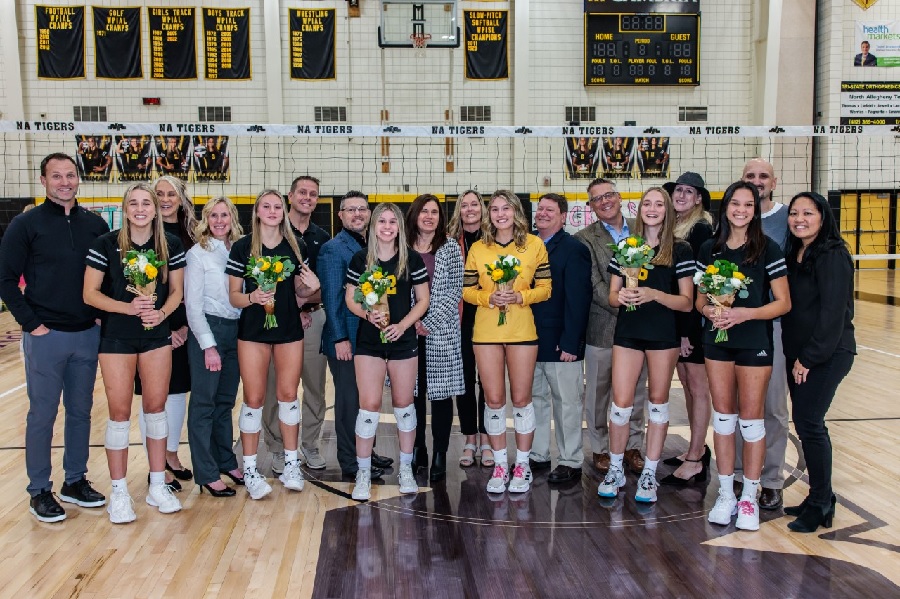 The North Allegheny girls’ volleyball team secured an eighth consecutive section crown on Thursday night with a 3-0 sweep of the Butler Golden Tornado on Senior Night at NASH. The Tigers won by set scores 25-16, 25-9 and 25-9.

The high-octane Tigers used a lengthy run of points to gain control in each set. Leading 2-1 in game one, NA rattled off a 7-0 run to grab a 9-1 lead. Senior Ella Deeter had the hot hand in the first set and belted out five kills to help NA to a 25-16 win. Deeter finished with a team-high nine kills and tied for the team lead in blocks with three. Junior Ariana Schiller also stuffed the net with three blocks on the night and totaled three kills in set one.

In set two, the Tigers and Tornado were deadlocked at 3-3 before a 9-0 run gave NA control. Senior Carissa Treser tallied five kills to spearhead North Allegheny’s 25-9 win. Treser finished with six kills and three aces on the evening.

It was more of the same in set three as the Tigers used a pair of 6-0 runs to take a 12-2 lead. Senior Mia Tuman delivered three kills and five aces in the set, including an ace for the match-ending point in a 25-9 victory. Tuman also dished out a team-best 26 assists.

Another key to the victory was the serving of senior Rebecca Pilotta, who had the most serve attempts and put 14 serves in play. Adding five digs on defense, Pilotta was named the Wright Automotive Player of the Match.

North Allegheny improves to 13-0 overall and 7-0 in Section 1-AAAA, while Butler falls to 1-7 in section play. The Tigers will faceoff against Landisville Hempfield and State College for a pair of tough non-section games on Saturday.