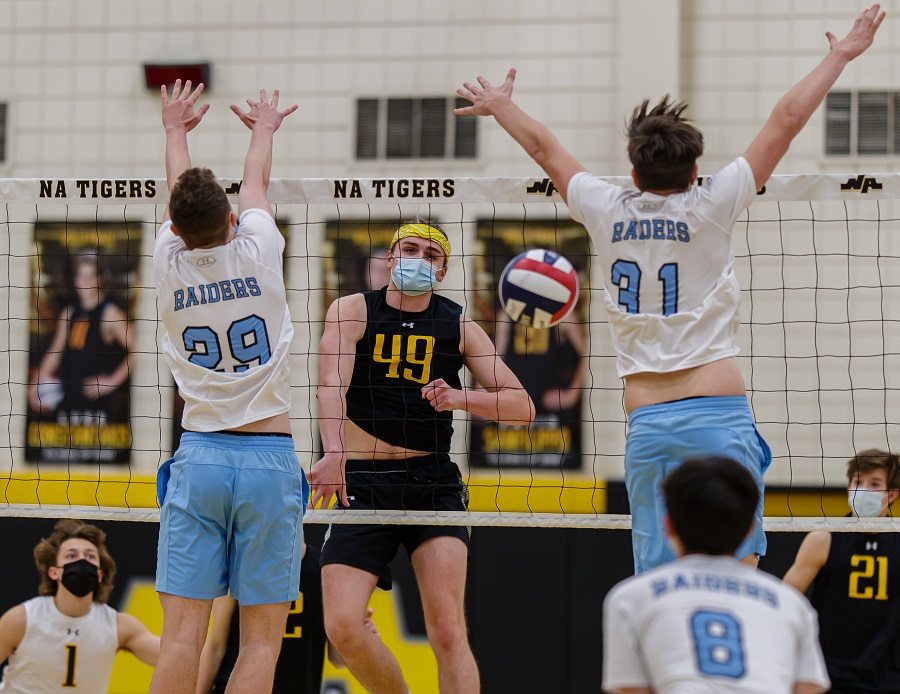 In a battle between the top two-ranked teams in the WPIAL, the North Allegheny boys’ volleyball team locked up the Section 2-AAA title on Tuesday night with a 3-1 home win over the Seneca Valley Raiders. The Tigers won by set scores of 25-23, 25-20, 23-25 and 25-14.

As was the case most of the night, the opening set was tightly contested and Seneca Valley held an 18-17 lead before the senior hitting combo of Garrett Hrvoich and Michael Mosbacher helped NA prevail, 25-23. Both Hrvoich and Mosbacher posted five kills in the set on their way to big offensive nights. Hrvoich finished with a team-best 13 kills and Mosbacher tallied 12 kills.

The second set was tied 14-14 when a North Allegheny timeout halted the momentum of a 4-0 run by Seneca Valley. The middle hitters of David Sanfillipo and Timmy Ditka swung the pendulum back toward the Tigers with their deadly accurate swings and timely blocks. As he did to end the first set, Sanfillipo delivered a kill to conclude set two, giving the Tigers a 25-20 win. Sanfillipo tallied 10 kills and four blocks. Ditka finished with 11 kills and was named the Wright Automotive Player of the Match.

Set three featured five lead changes in the early going but Seneca Valley snapped a 10-10 tie with a 4-0 run and led the remainder of the set, breaking through for a 25-23 win. The Raiders were paced by senior Michael Devlin with 15 kills.

The fourth set was deadlocked 4-4 to start but Seneca Valley had no answer for the middle duo of Sanfillipo and Ditka and the Tigers ran away for a 25-14 triumph to clinch the section title.

Contributing to the victory on defense were Peter Carioto and Ryan Treser with 12 and nine digs, respectively. Junior setter Caleb Schall facilitated the offense with 52 assists.

With the win, North Allegheny improves to 11-0 overall and in the section. Seneca Valley slides to 9-2 in section play. The Tigers will cap the section slate on Thursday night with a visit to Pine-Richland.