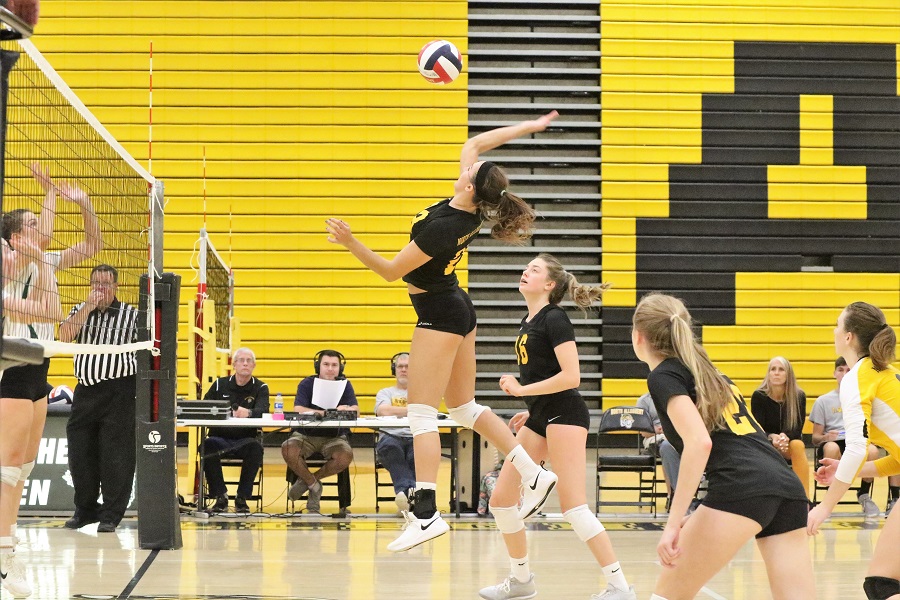 In a battle of undefeated team in Section 1-AAAA, the North Allegheny Tigers took sole possession of first place in the section standings with a 3-0 win over the Pine-Richland Rams on Tuesday night. The Tigers won by set scores of 25-10, 25-23 and 25-21. The victory marks the 12th straight against the Rams and the 32nd in a row overall.

The top-ranked Tigers got off to a hot start against the fifth-ranked Rams and cruised to a 25-10 triumph in the opening set. Sophomore Paige Miller, and seniors Anna Sprys and Avery Tuman all posted four kills each in set one.

Pine-Richland bounced back in the second set and held an 11-5 lead thanks in part to senior Michaela Pettinato, who totaled four kills in the set. Freshman Sophie Catalano notched three kills and a block as well. However, North Allegheny rallied on the strength of four kills by Tuman, including set point, to prevail 25-23. Tuman finished with nine kills on the night.

The Rams again had NA on the ropes in the third set and held a 19-15 lead late in the game. Undaunted, the Tigers once more came from behind and rolled off 10 of the next 12 points to win the set, 25-21. Paige Miller played a key role with six kills in the set on her way to a team-high 12 kills.

Providing timely kills and blocks throughout the night, Sprys was selected as the Wright Automotive Player of the Match by the North Allegheny Sports Network.

North Allegheny improves to 9-0 overall and 6-0 in Section 1-AAAA. Pine-Richland falls to 5-2 overall and 5-1 in the section. The Lady Tigers host Shaler on Wednesday night at 7:00 p.m. in another section contest.