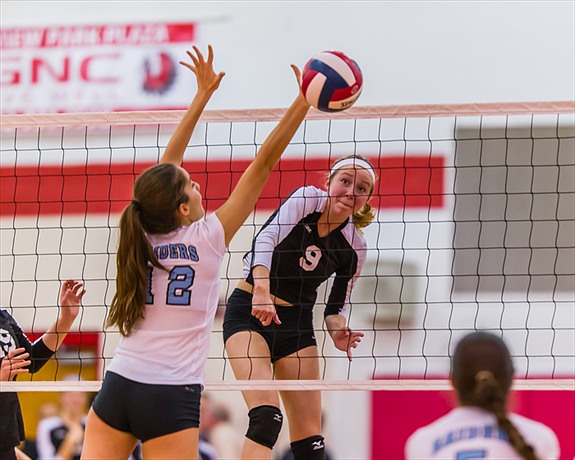 The North Allegheny girls’ volleyball team earned a third straight trip to the WPIAL Class AAA championship with a 3-0 triumph over rival Seneca Valley in the WPIAL semifinals from North Hills high school. The Tigers swept the Raiders in their two Section 3 meetings in the regular season and were able to outlast their section foe on Thursday night by set scores of 25-20, 25-18 and 25-20.

Helping the Tigers to the win was the rock solid play of setter Beth Muhlenkamp. The Palm Beach Atlantic recruit set her teammates up for big swings throughout the night and was named the Wright Automotive Player of the Game.

Along with the efforts of Mosbacher, senior Lauren Swartz collected two kills and block in the opening set to propel the Tigers to the set one victory.  It didn’t come easy for NA as junior Tatum Poirer  notched three kills and Isabella Seman garnered three aces to tie the score 19-19 late in the opening sate. However, the Tigers rolled off five of the next six points to earn a 25-20 set one win.

In set two, the Raiders fell behind 13-6 and never quite recovered. Maria Mosbacher and Lexi Kotrick delivered three kills apiece in a 25-18 win for North Allegheny.

The third set saw a gutsy performance from Seneca Valley senior Madeline Poirer who smashed five kills and helped the Raiders secure a 19-18 lead. Late in the set, Poirer left the game after hitting the floor hard with an apparent arm injury. Despite her return a few minutes later, it was too late as the Tigers rattled off seven of the last eight points of the set to claim a 25-20 win and captured a 3-0 match victory. Swartz, a Michigan State recruit, hammered out four kills in the final set to help North Allegheny finish off the Raiders.

North Allegheny improves to 19-0 overall and will take on the reigning Class AAA champion Baldwin Highlanders in the title tilt on Saturday at 6:00 pm at Baldwin High School. The contest will be a rematch of last year’s WPIAL championship. The match will be broadcast live via the internet on the North Allegheny Sports Network.